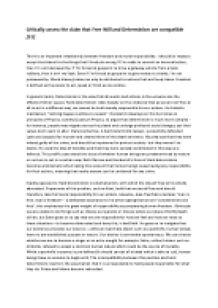 Assess the claim that Free Will and Determinism are compatible

﻿Critically assess the claim that Free Will and Determinism are compatible [35] There is an important relationship between freedom and moral responsibility. I should be ready to accept the blame for the things that I freely do wrong. If I'm made to commit an immoral action, then I?m not blameworthy. If I'm forced at gunpoint to drive a getaway vehicle from a bank robbery, then it isn't my fault. Even if I'm forced at gunpoint to give money to charity, I'm not praiseworthy. Moral blame/praise can only be attributed to actions that are freely taken. Freedom is defined as the power to act, speak or think as one wishes. In general terms, Determinism is the view that all events and actions in the universe are the effects of other causes. Hard determinism relies heavily on the credence that as we are not free at all to act in a different way, we cannot be held morally responsible for our actions. As Aristotle maintained, "nothing happens without a reason". Honderich develops on this but relies on principles of Physics, namely Quantum Physics, to argue that determinism is much more complex - for instance, people may migrate across the planet and undergo profound social changes, yet their values dont seem to alter. ...read more.

Hume states it is not God who determines the limits of human beings' free will, it is nature that is in ultimate control of human destiny. Events are determined because of a causal link between objects (CONSTANT UNION OF OBJECTS). If you are wanting to travel to a particular destination by plane, and your journey is delayed due to extreme weather conditions - this delay was always predetermined. The individuals' response to this situation, leads onto human free will - the individual may choose to change form of transport, perhaps commuting by train, or may choose to not travel and delay the trip altogether. The individual is free to make the choice, Hume calls this INTERFERENCE OF THE MIND. Hume's compatabilist thinking counteracts three particular ideas: The first is Libertarianism, which states that human beings are entirely free. The next is hard determinism, which asserts that everything a human being does is predetermined. The last idea that Hume rejects is the idea of chance, or what ethicists sometimes call moral luck. The latter is regarded as nonsense by Hume, simply because events are determined. They are not random; take a scenario where an individual is confronted by a robber. ...read more.

In a similar example , The Queen of England holds a right to 'kill' anybody she so wishes and not be put under trial - arguably, she too has been conditioned to believe she is superior and more important than others, yet she chooses not to exercise this superiority out of free will, because it is against the norms and values of society - and also because murder is wrong. Leob and Leopold are no different. Libertarianism also comes under scrutiny as it becomes more complicated in its comprehension of what true freedom is. In real life, we will always be governed by the laws of the land, as well as in everyday scenarios. In that case, does this mean our very reality restricts us from true freedom? Even in institutions such as the Media, we are made to think in a certain way. Arguably then, it is impossible to be truly free. Another criticism that a geneticist may put forward, contrary to the Libertarian Sartre, is that infact our essence precedes our existence - as our essence is prevalent in our genetic makeup - some may be genetically gifted athletes, whilst others were born with genetic deformities. I would argue Soft Determinism, in this day and age is the most sensible and accurate form of moral decision making. It presents the balance of being both free and predestined and is coherent in its reasoning. ...read more.