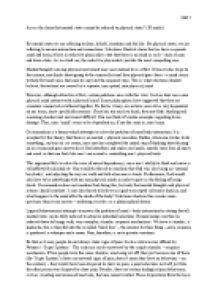 Assess the claim that mental states cannot be reduced to physical states.

﻿2/6/15 Assess the claim that mental states cannot be reduced to physical states? (50 marks) By mental states we are referring to ideas, beliefs, emotions and the like. By physical states, we are referring to neuron interaction and connections. Substance Dualists claim that we have a separate mind and brain, where as reductive physicalists state that there is no mind as such ? only a brain and brain states. As we shall see, the reductive physicalists provide the most compelling case. Mental thoughts causing physical movement may seem natural to us at first. If one wishes to go to the cinema, one thinks about going to the cinema first and then physical goes there ? a mind seems to think first and cause the brain to carry out the required steps. This is what substance dualists believe, that actions are caused by a separate, non spatial, non physical, mind. However, although attractive at first, certain problems arise with this view. Such as how can a non physical mind interact with a physical brain? Some philosophers have suggested that they are somehow connected or tethered together. Be that as it may, our actions seem to be very dependent on our brain; more specifically neurons. ...read more.

These dispositions form the basis of behaviourism. For a statement to be true, simply a series of ?if then? statements need to be true. Jim believes it is going to rain, if she is going outside, then she will put a coat on; if she has washing outside, then she will bring it inside. Logical behaviourism also makes the criticism of substance dualism that it has made a ?category mistake?. Take the example of Oxford University. A friend shows a new comer around the city, at the end the new comer says, ?that?s all very nice, but where is the university?? He has not realised that all the different buildings ? the colleges, libraries and so forth ? are the university. Substance dualists have been guilty of the mistake, trying to find this mysterious ?mind?, when it fact the mind ? behaviour ? is all around them. The problem of the privacy of the mental does seem unsolved however. In order to know how I feel about something I don?t need to understand my behaviour from a third person perspective: I have firsthand knowledge of what I am feeling right now. ...read more.

These tree rings contain information about the weather; which vary in a law-like fashion depending on the conditions. Can this purely physical thing exhibit intentionality then? Questions have been raised about whether this is the same as a person?s belief about the weather. But, nevertheless, this is still evidence to prove the identity theory?s conclusion. Finally, only the identity theory can solve the problem of neural dependency ? as the mind being the brain it is inevitable that any alterations to the brain will thus affect our conscious experience. It furthermore solves the mind-body interaction as they are both one and the same; and the privacy of the mental can, in theory, be exposed as no privacy at all: thoughts and desires et cetera being only neurones firing and interacting one could, in theory, with enough understanding of the brain know what someone was thinking. Overall, only the identity theory has enough credibility for one to accept its conclusions; that the mind and the brain are one and the same. Substance Dualism being stumped on neuronal dependency, mind body interaction and logical behaviourism becoming stuck on, or offering half baked answers to, issues such as privacy of the mental, intentionality and qualia. Only the identity theory can give satisfactory answers to these questions. ...read more.