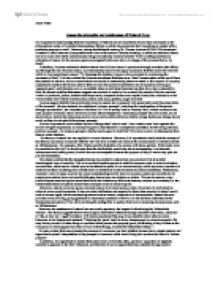 Assess the strengths and weaknesses of Natural Law.

Assess the strengths and weaknesses of Natural Law. It is important to acknowledge that the foundations of Natural law are considered to have been developed in the philosophical works of Aristotle (Nicomachean Ethics), in which he proclaimed that 'everything is created with a particular purpose in mind'. However, during the thirteenth century, St. Thomas Aquinas (1224-1274) developed Aristotle's initial ideas and incorporated these views with modern Christian thinking, in which he described natural law as a moral code which natural human beings are naturally inclined towards: "Law is nothing else than an ordination of reason for the common good promulgated by the one who is in charge of the community (i.e. by God)". In addition, Aquinas maintained that the eternal law of divine reason is perceived through revelation (the Bible) and through the use of human reason, and subsequently came to the logical conclusion that the moral life is the life which is lived according to reason: "To disparage the dictate of reason is the equivalent to condemning the command of God". It is also evident that Aquinas considered that there is an 'ideal' human nature which we all have the potential to achieve, and our moral actions are crucial in determining where we stand in this respect. ...read more.

For example, Peter Vardy uses the illustration of a woman with heavy periods. If the doctor were to prescribe her the 'pill' to stop the pain then the fact that this would also act as contraception is a fortunate consequence and nothing more; it would be seen as acceptable because the purpose of the pill was to stop pain not prevent fertilisation. It is clearly evident that the strengths that can be ascribed to natural law are a product of its absolutist deontological view of morality. This is to say that it enables people to establish common rules in order to structure communities, which can be viewed upon as an attractive option in our current society, which at present, consists of a relativist era that is suffering from a break down in traditional social structures and moral uncertainty. Furthermore, Aquinas's view of reason as a tool for moral understanding and his idea of a common nature and morality for all people gives natural law a universality that goes beyond any one religion or culture. This can be seen as a very positive aspect considering the intercultural strife and disharmony that exists between cultures and societies (i.e. the middle-east) ...read more.

I would also like to take this opportunity to make reference to Proportionalism which is an ethical theory developed to provide a more balanced approach between Christian natural law and the modern relativist Christian ethic - situationism. In conclusion, in trying to decide if natural law can be held as a definitive ethical theory one has to realise that although the theory isn't as rigid as it first appears (i.e. the secondary precepts may change in particular aspects) it is still faced with problems, which may well, be insurmountable. The conclusions of the Roman Catholic Church regarding the prohibition of activities such as artificial contraception and homosexual acts can be subject to convincing challenge. It is also important to note that in the absence of clear guidelines it is impossible to know definitively what is and what is not natural and so therefore rendering the issue entirely subjective. Once an issue becomes subjective (based on a person's emotions and prejudices), and it is difficult to produce an instance when subjectivity would be absent, and therefore I regard natural law as a failure of a definitive ethical theory. James Yates ...read more.