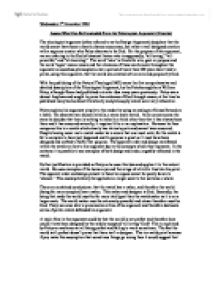 Assess What Can Be Concluded From The Teleological Argument

The teleological argument (often referred to as the Design Argument) deciphers that the world cannot have been a chaotic chance occurrence, but rather a well designed creation with a supreme creator who Paley observes to be God. For the purpose of this argument, we are referring to the God of classical theism who is supposedly, "all-loving," "all-powerful," and "all-knowing." The word 'telos' is Greek for aim, goal or purpose and the word 'logos' means reason and the relevance of these can be seen throughout the argument as countless philosophers over a period of more than 200 years have tried to prove, using this argument, that the world was created with an aim and purpose by God. With the publishing of the Natural Theology (1802) came the first comprehensive and detailed description of the Teleological Argument, by the Peterborough born William Paley, although Hume had published a similar idea many years previously. Paley was a devout Anglican and sought to prove the existence of God through reason, at the time he published many books about Christianity and philosophy which were very influential. Paley explains his argument simply to the reader by using an analogy of himself stood on a heath. He observes two objects initially, a stone and a watch. As he comes across the stone he decides that there is nothing to make him think other than that it has always been there and it has occurred naturally; it requires little or no explanation. ...read more.

From the evil in the world, we cannot assume an all-loving God, and from the diversity in the universe we cannot assume only one God; this contradicts the theory of the God of Classical Theism. There is also the argument that the cause of anything is only great enough to have caused its effect. From this we may establish that a contingent world would not have been created by a necessary being, i.e. God. The idea that there may be multiple God's was illustrated by an analogy of a ship: A ship has many builders, why can a world not have the same with many world builders? Several Gods may have co-operated on creating the world. Following on from this, Hume argues that if it's not the God of Classical Theism then why not an apprentice God? This would provide feasible explanation for the imperfections existent in the world. Furthermore, the teleological argument fails to prove the current existence of a God as the creator of the world could now be destroyed as is suggested by some Christians, this would add further explanation to the imperfections in the world. Hume's arguments should not be disregarded as although they differ from Paley's slightly in that they both use different analogies, Hume provides far more criticisms for his argument which come from a wider variety of approaches. In my opinion despite Paley's argument having a stronger case due to its relevance in modern society and links to an individually specified object, unlike Hume who seeks to relate to a wider population by using a more generalization of a man-made machine. ...read more.

This suggests that God and evolution are compatible in the sense that if things hadn't been created exactly as they are evolution could not have taken place and therefore the universe must have had a designer. This argument is a successful one for me, as it would support the view that God created the world then ceased to exist or that he created beings that would evolve to be humans, with their own free will. This would also justify the imperfections in the world as the free will given to humans allows them to do as they wish with the world. In conclusion, the argument may evoke a greater sense of wonder amongst people, although is unlikely to convince atheists as to God's existence. Criticisms of the argument will fail to dishearten those who already view the world with fascination either. The argument is does not prove the existence of one God or a God that is any of the characteristics outlined in the Classical Theistic description of God. The a posteriori nature of the argument means that it is not logically compelling yet fascinates countless numbers of people. In my own opinion I find the Anthropic Cosmological Principle most compelling with the ideal that God did have a hand in the creation of the universe yet much of it still relies on the natural process of evolution, which despite remaining a theory has strongly supporting scientific evidence (e.g. the pea plant experiment). ?? ?? ?? ?? Wednesday 1st November 2006 Assess What Can Be Concluded From the Teleological Argument (24marks) ...read more.