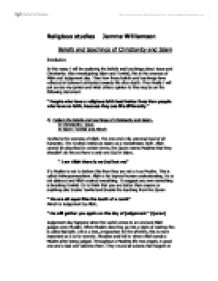 Beliefs and teachings of Christianity and Islam.

Religious studies Jemma Williamson Beliefs and teachings of Christianity and Islam Introduction In this essay I will be exploring the beliefs and teachings about Jesus and Christianity. Also investigating Islam and Tawhid, this is the oneness of Allah and Judgement day. Then how these beliefs and teachings have reflected in believer's attitudes towards life after death. Then finally I will put across my opinion and what others opinion to this may be on the following statement. " People who have a religious faith lead better lives than people who have no faith, because they see life differently " A) Explain the beliefs and teachings of Christianity and Islam. In Christianity: Jesus In Islam: Tawhid and Akirah Tawhid is the oneness of Allah. The one and only universal God of all humanity. The Tawhid reinforces Islam as a monotheistic faith. Allah cannot be described in certain terms, the Quran warns Muslims that they shouldn't do this as there is only one God in Islam, " I am Allah there is no God but me" If a Muslim is not to believe this then they are not a true Muslim. ...read more.

He showed how to forgive. Mary Magdalene, a prostitute fell to Jesus' feet, He said whilst he was on the cross. " Father forgive them for they no not what they do." He also taught his people not to judge others. " Do not judge and you will not be judged " Christians have a golden rule this should be used in everything that they do. " Love your Neighbour as Yourself " B) How these teachings and beliefs reflected in believers attitudes towards life after death. Christians believe in forgive and reform. Christians can correct their sins. Jesus showed the way to heaven, by following his teachings. Jesus showed life after death when he resurrected from the death. Jesus taught Christians for God to give you life after death, you have to prove your faith by actions and putting the teachings of Jesus into a Christians daily life. So Christians did this. Then they would be rewarded with heaven. ...read more.

But I disagree that people who have a religious faith lead better lives. I could say this statement isn't true as a quote from the bible says, " We are all one In the lord Jesus Christ." if we are all one why does that statement state that people that have a religious faith have a better life than those that don't. Although I disagree with " People who have a religious faith lead better lives than people who have no Faith. " I can understand why this is said. In some cases some people prefer to always know what is going to happen. If they have a fixed faith such as Islam. They no what they have to do to achieve there goal of going to Paradise and therefore can prepare for this. If someone has no fixed faith and doesn't follow any particular religion they are always unsure of what will happen in their future life and whether there is a future life. And how to respond to this. But I understand that others may prefer to have an undecided Future. Jemma Williamson ...read more.