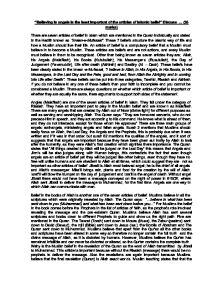 "Believing in angels is the least important of the articles of Islamic belief" Discuss... (35 marks) There are seven articles of belief in Islam which are mentioned in the Quran individually and stated in the Hadith known as "Imaan-e-Mufassal". These 7 beliefs structure the Islamic way of life and how a Muslim should live their life. An article of belief is a compulsory belief that a Muslim must believe in to become a Muslim. These articles are beliefs and are not actions, and every Muslim must believe in them to be recognised. Other than being known as seven articles they are; Allah, his Angels (Mala'ikah), his Books (Kutubullah), his Messengers (Rusulullah), the Day of Judgement (Yawmuddin), Life after death (Akhirah) and Destiny (Al - Qadr). These beliefs have been clearly stated in the Imaan-e-Mufassal, "I believe in Allah, in His Angels, in His Books, in His Messengers, in the Last Day and the Fate, good and bad, from Allah the Almighty and in coming into Life after Death". These beliefs can be put into three categories, Tawhid, Risalah and Akhirah. If you do not believe in any one of these beliefs then your faith is incomplete and you cannot be considered a Muslim. There are always questions on whether which article of belief is important or whether they are equally the same, there arguments to support both sides of the statement. Angles (Mala'ikah) are one of the seven articles of belief in Islam. They fall under the category of Risalah. They have an important part to play in the Muslim belief and are known as Mala'ikah. There are many angels that are created by Allah out of Noor (divine light) for different purposes as well as serving and worshipping Allah. The Quran says: "They are honoured servants, who do not precede Him in speech, and they act according to His command. He knows what is ahead of them, and they do not intercede, except for those whom He approves" There are three main groups of angels: archangels, ministering angels and fallen angels. ...read more.

Furthermore, Islam preaches that there is only one Supreme and Eternal God and that is Allah and it could be argued that h is the most important article of belief as he is omnipotent and omnibenevolent. He is the creator and sustainer of everything. He is Transcendent and omniscient, he is unique and invisible, but is always close to us and is Omnipresent. One of the most important aspect of Islam is Tawhid, the oneness and unity of Allah and to not have faith in Tawhid is committing shirk (sin). Tawhid is expressed in the Shahadah which is the Muslim declaration of faith and is the first pillar of Islam. It testifies that "There is no god but Allah and Muhammad is the messenger of Allah". It is beyond human understanding to know the full characteristics of Allah, that's why there are the 99 names of Allah suggest that no one knows Allah perfectly and that's why there aren't 100 names because it is beyond our understanding to understand such as beautiful being. This article of faith is important because Islam is based on worshipping (Ibadah) Allah and if there was no Allah then there would be no universe and no Islam. That's is why the purpose of humans is to worship (Ibadah) Allah by reading the Quran and practising the Pillars of Islam, and this is mentioned in the Quran which states "we were created for none but to worship God" this means that Muslims' were created to look after his creation and be stewards by sustaining the creation. If we were only created to Ibadah Allah then, this suggests that he is the most important article of faith. It could be argued that the belief in Allah results to the belief in the books, messengers, angels, last day and al-qudr which could be treated the same in all respects. The fifth article of belief is the day of judgement. ...read more.

Life after Death and the Day of Judgement also link in with the fact that this earthly life is attest and that we are just living to strive for the to follow and serve Allah all their lives until the Last day, where they are resurrected and are Judged on their deeds. Another argument for the statement would be that all of Allah' creation has free will including humanity except the angels, this questions if they are really important or are the messengers important as they had to reveal the message to humanity along with having free will. However, angels like humans were created to submit to the will of Allah and likewise will be judged on the Last day. But to "revert" back to Islam, as everyone is born as a Muslim, all you need to read it the Shahadah, but it doesn't mention anything about the angels in the Shahadah which could support the argument. However, some Muslims find all the articles of belief equally important and if you do not believe in one of them then you cannot be considered a Muslim. Angels are important because they are a way of communication in which Allah can communicate through mankind. Angel Jibrail was the intermediate between Allah and Muhammad. Allah delivered the message to Muhammad through Jibrail. Without angels there would be no night of power. To some extent, all the articles of belief are equally important but Angels could be seen as least important, they still are important and play a key role in Islam. Most Muslims today would believe that the seven articles of faith should all be equally important and significant in Islam. I personally believe that all the articles of belief are equally important and that a Muslim should have faith in all these beliefs to be recognise as a Muslim as the Quran says: "The Messenger [Muhammad] believes in what has been sent down to him from his Lord and [so do] the believers. Each one believes in Allah, His Angels, His Books, and His Messengers". ?? ?? ?? ?? ...read more.