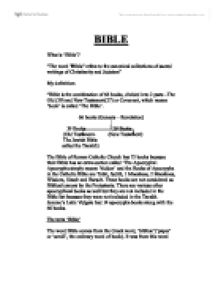 Bible is the combination of 66 books, divided into 2 parts -The Old (39) and New Testament(27) or Covenant, which means 'book'

BIBLE What is 'Bible'? "The word "Bible" refers to the canonical collections of sacred writings of Christianity and Judaism" My definition: "Bible is the combination of 66 books, divided into 2 parts -The Old (39) and New Testament(27) or Covenant, which means 'book' is called 'The Bible'. 66 books (Genesis - Revelation) 39 Books 29 Books (Old Testament- (New Testament) The Jewish Bible called the Tanakh) The Bible of Roman Catholic Church has 73 books because their Bible has an extra section called 'The Apocrypha'. Apocrypha simply means 'hidden' and the Books of Apocrypha in the Catholic Bible are Tobit, Judith, 1 Macabees, 2 Macabees, Wisdom, Sirach and Baruch. These books are not considered as Biblical canons by the Protestants. There are various other apocryphical books as well but they are not included in the Bible list because they were not included in the Tanakh. Jerome's Latin Vulgate had 14 apocrypha books along with the 66 books. ...read more.

The Old Testament was mostly written in Hebrew and some passages in Aramaic. Those passages are: - Ezra 4:8-6, 6:18, 7:12-26, Daniel 2:4-7, 7:28 and Jeremiah 10:11. Hebrew is called as a Semitic Language because it has it's roots from Shem, the eldest son of Noah. Aramaic belongs to the Semitic sub family. It is believed to be the native language of our Lord and Saviour Jesus Christ. The New Testament was written in Greek. It is considered by some that the Gospel of Matthew was written in Hebrew because Matthew, a disciple of Jesus Christ, wrote the Gospel for the Jews, who were eagerly waiting for the Messiah. Now, a large number of Jews spoke Hebrew. So, he could have written his Gospel in Hebrew. Otherwise, how could the Jews understand? Greek spread throughout Middle East as the result of the conquest of Alexander more than 300 years before Jesus Christ. ...read more.