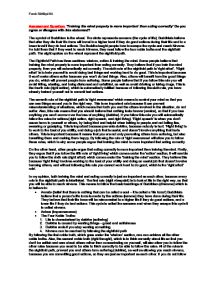 Buddhism - : Training the mind properly is more important than acting correctly Do you agree or disagree with this statement?

Assessment Question: 'Training the mind properly is more important than acting correctly' Do you agree or disagree with this statement? The symbol of Buddhism is the wheel. The circle represents samsara (the cycle of life). Buddhists believe that after they die their life force will travel to a higher level if they do good actions during their life and to a lower level if they do bad actions. The Buddha taught people how to escape the cycle and reach Nirvana. He told them that if they want to reach Nirvana, they must follow the four noble truths and the eightfold path. The eight spokes on the wheel represent the eightfold path. The Eightfold Path has three sections: wisdom, action & training the mind. Some people believe that training the mind properly is more important than acting correctly. They believe that if you train the mind properly, then you will automatically act correctly. The sixth rule of the eightfold path is 'right effort'. 'Right effort' is to train yourself to avoid doing bad things and working hard to do good. ...read more.

'Right speech' is when you don't cause harm to yourself or others, by being kind and helpful when talking to people, and not telling lies, swearing or gossiping. This is important because prevents dukkha, because nobody is hurt. 'Right living' is to work to the best of you ability, and doing a job that is useful, and doesn't involve anything that hurts others. This is important because it means that you are not only preventing others from suffering, but also benefiting them and making them happy. By following the rule of 'right awareness' will allow you to follow these rules, which is why some people argue that training the mind is more important that acting correctly. On the other hand, other people argue that acting correctly is more important than training the mind. Firstly, they argue that if you follow the fifth rule of 'right living' which comes under the 'action' section, it will enable you to follow the sixth rule (right effort) which comes under the 'training the mind' section. ...read more.

Dukkha is caused by wanting things - greed and selfishness 3. Dukkha ends if you stop wanting something 4. Nirvana can be reached by following the eightfold path By following the first noble truth, which goes under the 'wisdom' section, one can achieve all the other noble truths. Also, the second noble truth (right thought), which is to think correctly about life so that you don't be selfish and care about others rather than concentrating on yourself, will also allow you to follow the other rules because you need to be able to think correctly to be able to follow the rules. All of the rules in the eightfold path, prevent you and others form suffering (dukkha), as well as allowing you reach nirvana, because you are committing good actions, so they are just as important as each other. If you do not follow any one of these rules you will not be able to fulfill another, which can lead you to committing bad action. This will result in your life force being reincarnated to a lower stage. ?? ?? ?? ?? Farah Siddiqui 9A ...read more.