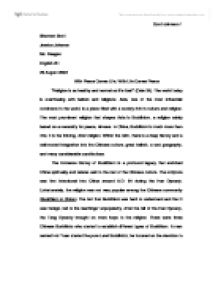 Shannon Scott Jessica Johnson Ms. Reagan English 2H 29 August 2002 With Peace Comes Life, With Life Comes Peace "Religion is as healthy and normal as life itself" (Dole 34). The world today is overflowing with beliefs and religions. Asia, one of the most influential continents in the world, is a place filled with a society rich in culture and religion. The most prominent religion that shapes Asia is Buddhism, a religion solely based on a necessity for peace, nirvana. In China, Buddhism is much more than trite; it is the thriving, chief religion. Within the faith, there is a deep history and a well-rooted integration into the Chinese culture, great beliefs, a vast geography, and many considerable contributions. The immense history of Buddhism is a profound legacy that enriched China spiritually and relates well to the rest of the Chinese culture. The scripture was first introduced into China around A.D. 64 during the Han Dynasty. Unfortunately, the religion was not very popular among the Chinese community (Buddhism In China). ...read more.

Buddhists describe reality in terms of process and relation rather than entity or substance. They believe experience is analyzed into five aggregates called skandhas. They are form or material existence, sensations, perceptions, psychic constructs, and consciousness. The central Buddhist teaching of non-self called anatman asserts that in the five aggregates no soul can be found. All supernatural occurrences arise in dependence on causes and conditions, and are subject to inevitable decay and death. The conditions are defined in a twelve-member chain called dependent origination or pratityasamutpada ("Buddhism" 89). It's links are: ignorance, predisposition, consciousness, name-form, the senses, contact, craving, grasping, becoming, birth, old age, ignorance, and death. The religion expands in both mind and spirit, also encouraging expansion physically, bringing Buddhism to new countries. The geography of the Buddhist creed has brought Buddhism over from India on the Silk Road. The Silk Road was a route from Europe to China; people would travel between the two to conduct trade. ...read more.

Buddhism is also believed to bring people to an inner peace, especially in America today. Some think meditation will constitute Buddhism's distinct contribution to American religious life. Different branches practice different varieties, but each begins with a simple awareness of breath drawn in and let out. "Americans have always been a do-it-yourself culture, and this is a do-it-yourself philosophy" (Funk). The Buddhists are people willing to give their preeminent abilities in order to achieve a peace with everyone they meet. With such an insightful religion, Buddhism has thrived everlastingly and maintained a rank in the religion status that is difficult to surpass. Buddhism has a magnificently intense background and disposition in the Chinese culture. Their immense beliefs are more than enough to boast about and have an honest background and intention. The geographical route that has taken Buddhism to China has encouraged many to convert to Buddhism, which has graced China with its tranquil presence. The considerable contributions that Buddhism and Buddhists bring to others is astounding at times, and finds a place in most people's hearts and minds. Overall, Buddhism conveys great peace with a hope for a better, everlasting life. Scott-Johnson 1 ...read more.