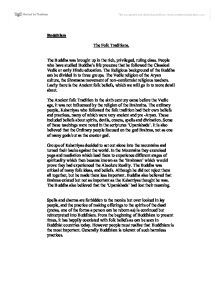 Buddhism The Folk Traditions. The Buddha was brought up in the rich, privileged, ruling class. People who have studied Buddha's life presume that he followed the Classical Vedic or early Hindu education. The Religious background of the Buddha can be divided in to three groups. The Vedic religion of the Aryan culture, the Shramana movement of non-conformist religious teachers. Lastly there is the Ancient folk beliefs, which we will go in to more detail about. ...read more.

These included beliefs about spirits, devils, omens, spells and divination. Some of these teachings were noted in the scriptures 'Upanishads'. It is also believed that the Ordinary people focused on the god Brahma, not as one of many gods but as the creator god. Groups of Kshatriyas decided to set out alone into the mountains and turned their backs against the world. ...read more.

The Buddha also believed that the 'Upanishads' had lost their meaning. Spells and charms are forbidden to the monks but over looked in lay people, and the practice of making offerings to the spirits of the dead (pretas, one of the forms a person can be reborn as) is continued but reinterpreted into Buddhism. From the beginning of Buddhism to present times, it has happily coexisted with folk beliefs as can be seen in Buddhist countries today. However people must realize that Buddhism is the most important. Generally Buddhism is tolerant of such harmless practices. ...read more.