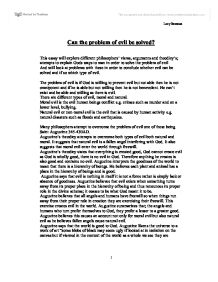 Can the problem of evil be solved

Can the problem of evil be solved? This essay will explore different philosophers' views, arguments and theodicy's; attempts to explain Gods ways to man in order to solve the problem of evil And will look at problems with these in order to conclude whether evil can be solved and if so which type of evil. The problem of evil is if God is willing to prevent evil but not able then he is not omnipotent and if he is able but not willing then he is not benevolent. He can't exist and be able and willing as there is evil. There are different types of evil, moral and natural. Moral evil is the evil human beings conflict e.g. crimes such as murder and on a lower level, bullying. Natural evil or non-moral evil is the evil that is caused by human activity e.g. natural disasters such as floods and earthquakes. Many philosophers attempt to overcome the problem of evil one of these being Saint Augustine 345-430AD. Augustine's theodicy attempts to overcome both types of evil both natural and moral. It suggests that natural evil is a fallen angel interfering with God. It also suggests that moral evil enter the world through freewill. Augustine's theodicy states that everything is created good, God cannot create evil as God is wholly good, there is no evil in God. Therefore anything he creates is also good and contains no evil. Augustine interprets the goodness of the world to mean that there is a hierarchy of beings. ...read more.

Hick says we are integral part of God's creation. We have not yet reached the "final day" of creation; God is still in a way creating humanity. "This earth is seen as a factory for making souls". So Hick is saying we suffer in order to provide incentive for improvement. Hick believes we need tests otherwise no of us would learn very much. He believes that diseases are a "test" we have to "pass". Hick states that in some areas we are passing, as we know how to avoid most diseases and how to treat those we cannot avoid. It can be seen as a sign of immense progress that the most persistent problems are the treatment of AIDS, cancer and genetic ailments. Even with these persistent diseases, theses sorts of problems have solutions, since this is a world in which certain physical laws apply without exception. Hick says without these "problems, there could be no science, no consistent laws of causation ect. In face, a "Paradise" without suffering would be the worst sort of world for motivating people to learn and advance morally. To conclude Hick says that the "evils" of the world can result in the growth of human character Hick does not attempt to solve the problem of evil just give reason to why we have it, to test ourselves and contribute to the growth of ones soul to become perfect. Although Hicks reasoning at first appears to give a purpose to evil, his theodicy seems incomplete as the idea that this soul making goes on after death cannot do anything to guarantee that there will not be pointless suffering in a post-mortem state. ...read more.

Rights imply duties. Only those in a moral community have rights and duties, God is not a member of a moral community. The amount of suffering in the world threatens to undermine Swinburne's theodicy. There is far more suffering than is necessary for us to have knowledge of good and evil consequences of our actions. Could God no have created the world with just enough to let us have knowledge. Swinburne would argue the fewer natural evils there are, the less opportunity man has to experience his freedom and response. Evil cannot completely be over come as with every argument there are many criticisms. However I believe that moral evil has been over come; through freewill that god gave to us, as we have the choice to conflict the evil, that some do although I do not completely support any of the above philosophers views, I can relate and agree with most, Plantinga's and Swinburne's. However I believe that moral evil is only moral evil, when done for the wrong reasons e.g. stealing a bag because it is nice. In comparison something that I do not believe to be evil is when something "bad" is done with good morals e.g. stealing food to feed the family that has none. I do not believe that natural evil can be over come. My reason for this is that I believe natural evil is a mistake in Gods geographical design of the plant however my theory undermines Gods omnipotence therefore I would conclude natural evil is still a mystery to today's world although it is likely to be discovered in the future. Lucy Brennan 2 1 ...read more.