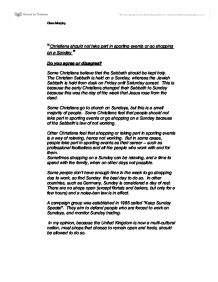 Other Christians feel that shopping or taking part in sporting events is a way of relaxing, hence not working. But in some cases, people take part in sporting events as their career - such as professional footballers and all the people who work with and for them. Sometimes shopping on a Sunday can be relaxing, and a time to spend with the family, when on other days not possible. ...read more.

There are no shops open (except florists and bakers, but only for a few hours) and a noise-ban law is in effect. A campaign group was established in 1985 called "Keep Sunday Special". They aim to defend people who are forced to work on Sundays, and monitor Sunday trading. In my opinion, because the United Kingdom is now a multi-cultural nation, most shops that choose to remain open and trade, should be allowed to do so. Ciara Murphy ...read more.