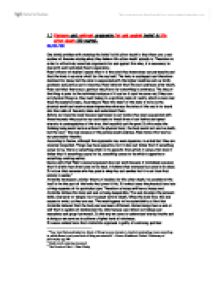 Compare and contrast arguments for and against belief in life after death.

1.) Compare and contrast arguments for and against belief in life after death (20 marks). 26/01/03 One initial problem with studying the belief in life after death is that there are a vast number of theories stating what they believe 'life after death' actually is. Therefore in order to effectively ascertain arguments for and against this idea, it is necessary to deal with each individual theory separately. Plato's theory of dualism1 argues that it is the mind that determines our personality and that the body is an outer shelf for the real self. The body is contingent and therefore destined for decay but the mind is associated with the higher realities such as truth, goodness and justice and is immortal. Plato believed that the soul continues after death. Plato said that there was a perfect idea/form for everything in existence. The idea of the thing is prior to the individual instance of it and so it must be more real. Ideas are not physical things so they must belong to a spiritual realm of reality, which is more real than the material realm. According to Plato the telos2 of the body is to be in the physical world and receive sense-impressions whereas the telos of the soul is to travel into the realm of heavenly ideas and understand them. Before our immortal souls became imprisoned in our bodies they were acquainted with these heavenly ideas and so our soul wants to break free of our bodies and spend eternity in contemplation of the true, the beautiful and the good. In this realm the thinking being would survive without the physical body, the body would not survive death, but the soul - the real essence of the person would continue. Plato terms this 'soul' as our personality identity. According to Davies, although the arguments may seem ingenious, in actual fact they are severely misguided. ...read more.

In fact it seems highly likely that they are not. Ryle's behaviourist theory can be assigned to a mode of thought known as materialism. There are two forms of this - hard materialism and soft materialism. Hard materialism refers to a mode of thought that does not accept that an individuals characteristics are anything more than physical ones. Any idea of consciousness is nothing more than brain activity. The mind cannot be separated from the body. When the body dies, then so does the brain. Soft materialists do not accept that all characteristics are physical ones. Consciousness is more than just a brain process. The mind and body are related to and do not act independently of each other, but the body often displays inner emotions. A physical symptom may be caused by something that is troubling the mind. There is nothing that we can do independent of our bodies and therefore our personal identity must involve our bodies. They believe that when the physical body dies, so does the mind. These views seem particularly strong as to oppose them would be to suggest that there are bodiless people capable of being defined as human beings, when surely having a body is part of the definition of being human. Not all materialists accept that death is the end, instead, some believe that there is life after death. As the physical body cannot be separated from the 'soul' (mind), there is only one way this could happen and that is if the whole body continues after death. The survival would have to involve the resurrection of the body. This belief is known as re-creation theory and is held by Christians. One flaw with this theory is that if we survive as both body and mind, then what state is the body in - are we old/young, sick/healthy etc. The question ultimately refers to the identification of the 'self' and who we really are. ...read more.

In addition can a bundle of energy really be constituted as 'living', if not then once again the argument is invalid. The argument of near-death experiences also puts forward an argument for life after death. Dr. Raymond Moody has studied many cases of people who had, to all intents and purposes died (during a surgical operation) and subsequently been resuscitated. Many claimed similar experiences - floating out of their bodies, travelling down a tunnel where they emerged into a world of light. However, these accounts have problems. Firstly, these accounts may be merely the result of people dreaming or experiencing some subconscious phenomena. Given the clarity of these dreams the first account seems unlikely, the second more plausible yet still is devoid of scientific evidence to support. Some have suggested that a lack of oxygen to the brain resulted in this hallucination. The main problem once again is verification in that it is impossible for us to experience the phenomena ourselves and judge its reliability accordingly. In addition, the types of experiences are often largely dependent on culture and society and so whether or not they are genuine or merely a manifestation of what the person may expect to see, or in the case of non-believers, expects not to see. One can counter-argue this however by saying that God may not actually be a fixed being but more of an interpersonal one varying from person to person and so the culture argument may not be relevant. The arguments discussed here are numerous, but generally do not hold a great deal of weight. The philosophical arguments are flawed and in places not logical, and the empirical arguments are generally unverifiable. However, given the sheer number of empirical arguments and the fact that some of them (near death experiences and regression to previous lives for example) are apparently otherwise unexplainable - we must realise that it is highly plausible if not possible that life after death does occur in some form or another. ...read more.