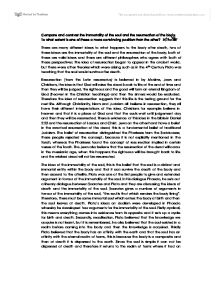 Compare and contrast the immortality of the soul and the resurrection of the body. To what extent is one of these a more convincing position than the other?

Compare and contrast the immortality of the soul and the resurrection of the body. To what extent is one of these a more convincing position than the other? 40 marks There are many different ideas to what happens to the body after death, two of these ideas are the immortality of the soul and the resurrection of the body; both of these are valid ideas and there are different philosophers who agree with both of these perspectives. The idea of resurrection began to appear in the ancient world, but there were other theories which were arising such as in the 4th Century Plato was teaching that the soul would survive after death. Resurrection (from the Latin resurrectus) is believed in by Muslims, Jews and Christians, the idea is that God will raise the dead back to life at the end of time and then they will be judged, the righteous and the good will form an eternal Kingdom of God (heaven in the Christian teachings) and then the sinners would be excluded. Therefore the idea of resurrection suggests that this life is the testing ground for the next life. Although Christianity, Islam and Judaism all believe in resurrection, they all have their different interpretations of the idea. ...read more.

Thirdly Plato believed that the body has an affinity with the earth and that the soul has an affinity with the eternal realm of forms, this is because the body is a composite and then at death it is dispersed to the earth. Since the soul is simple it can not be dispersed at death and therefore it returns to the realm of forms where it had an affinity. Finally Plato suggests that since the soul is simple and it can not be destroyed then when death occurs it must be destroyed or retreat, the soul is unable to be destroyed and so it has to retreat and it goes into the realm of the forms. These four arguments which were suggested by Plato were created deductively and therefore they do not rely on empirical and this is the main weakness of the argument. Ren? Descartes argues that the existence of the true self can be known through reason, in his book Mediations, he attempts to prove his existence through his argument "I think, therefore I am" (cogito ergo sum). Descartes believes that this is therefore proof of humans as thinking beings, he suggests that we are "thinking things" (res cognitans), this means that knowledge is separate from the body. ...read more.

idea, especially if someone has a terminal illness it would not just be comforting to the suffer, but also to the family if they believe that their soul is immortal. Also some religious experiences, such as near death experiences, people's testimonies may support this concept. Some testimonies suggest that they look down on their body; therefore this is evidence that the soul is separate from the body. Although there are strengths to the immortality of the soul argument, it does suffer from some significant weaknesses; the idea that the body is separate from the soul could be seen as unnecessary and unscientific as Ryle pointed out. Also this idea lacks a basis in traditional religious teachings, therefore Jews and Christians should be seen to reject it, because resurrection is a key feature of the Christian traditions. In conclusion, both the immortality of the soul and resurrection of the body are convincing positions, but to some extent, the immortality of the soul is more a convincing idea, this is because although resurrection does play a major role in the bible, Plato, Kant and Descartes all give convincing arguments to dualism. Also resurrection does have major weaknesses, because it is less verifiable than the immortality of the soul, there are many accounts of near death experiences and out of body experiences. ?? ?? ?? ?? ...read more.