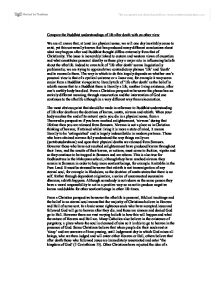 Compare the Buddhist understandings of life after death with on other view We are all aware that, at least in a physical sense, we will one day inevitably cease to exist, yet this universally known fact has produced many different conclusions about what may happen after and Buddhist thought differs extremely from that of Christianity. The issue is inexorably linked to eastern and western views of causation and what constitutes personal identity as these play a major role in influencing beliefs about the afterlife. Indeed to even talk of 'life after death' seems linguistically problematic; we are trying to approach two contradictory phrases 'life' and 'death' and to reconcile them. The way in which to do this largely depends on whether one's personal view is that of a cyclical universe or a linear one, for example it may seem easier from a Buddhist viewpoint to literally talk of 'life after death' as the belief in rebirth means that to a Buddhist there is literally a life, another living existence, after one's earthly body has died. From a Christian perspective however the phrase has an entirely different meaning, through resurrection and the intervention of God one continues to the afterlife although in a very different way than reincarnation. The most obvious point that should be made in reference to Buddhist understanding of life after death are the doctrines of karma, anatta, nirvana and rebirth. ...read more.

Some Christians believe that when people die their souls rest or 'sleep' and are unaware of time passing, until Judgement day in which God raises all beings, who are then Judged and will enter either Heaven or Hell, others believe that after death those who followed Jesus are immediately resurrected and enter 'the kingdom of God' (1 Corinthians 15). Other Christians have rejected the idea of a literal Heaven and Hell believing instead the concepts are in fact states of mind, or that Heaven does exist and it is being in the presence of God, whereas Hell is not a place of eternal torture but rather self exclusion from God. Despite the large contrasts between these two forms of belief there are some similarities and parallels albeit rather tenuous. Many people have often compared the Pure Land in some forms of Mahayanism to that of Heaven, the idea of a place of 'eternal light' and 'goodness' and to get there you must have faith in the grace of another being, God or Amitabha respectively. However for Pure Land Buddhists the Pure Land realm is not the ultimate destination or aim as in Christianity, it is still in Samsara and thus viewed as a favourable place to cultivate the necessary qualities to reach nirvana but is not Heaven as in Christian belief. ...read more.

There are also other more obvious contrasts. The Christian view of life after death is linear, you are born, you live, you die, you go to Heaven or Hell. Your existence was created purposefully by God and you only have one unchanging eternal soul and thus you are only ever one person. On the other hand however the Buddhist understanding is of a cyclical universe in which sentient beings are trapped and the ultimate aim is to attain nirvana and escape. Therefore the beliefs on what it means to live after one has physically died are extremely different. Parapsychology could be used as evidence by either belief, those who recall past lives under hypnosis may add weight to the belief in rebirth. Equally however those who have near death experiences or other religious experiences may support the Christian view. Ultimately however neither understanding of life after death is more valid than the other. Both religions are approaching the topic from different stand points and although there are parallels the presence of a personal God in monotheism means that Christian view points are evidently going to differ hugely from the cyclical non theistic view of Eastern thought. We have no way of knowing or testing either belief and as we are all yet to experience our own deaths perhaps the only way we will know is eschatologically. ...read more.