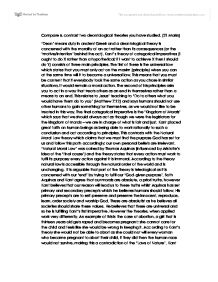 Compare & contrast two deontological theories you have studied. (21 Marks) 'Deon' means duty in ancient Greek and a deontological theory is concerned with the morality of an act rather than its consequences (or the 'motive/intention' behind the act). Kant's theory of categorical imperatives (I ought to do X rather than a hypothetical; if I want to achieve X then I should do Y) consists of three main principles. The first of these is the universal law which states that you must only act on the maxim (principle) when you can at the same time will it to become a universal law. This means that you must be content that if everybody took the same action as you chose in similar situations, it would remain a moral action. The second of his principles asks you to act in a way that treats others as an end in themselves rather than a means to an end. This relates to Jesus' teaching to 'Do to others what you would have them do to you' (Matthew 7:12) ...read more.

He believes that these are universal and so he is fulfilling Kant's first imperative. However the theories, when applied work very differently. An example of this is the case of abortion, a girl that is thirteen years old gets raped and becomes pregnant; she cannot care for the child and feels like she would be wrong in keeping it. According to Kant's theory she would not be able to abort as she could not will every woman who became pregnant to abort their child, if they did then the human race would not survive, making this a contradiction of the 'Laws of Nature'. Kant also argued that all humans have intrinsic worth and therefore by aborting so that she has an easier life the girl is treating the foetus as a means to an end. As for natural law, abortion goes against two of Aquinas' primary precepts, largely the precept of 'reproduction'. But also 'preservation of the innocent' suggests that issues such as euthanasia and abortion would not be permitted. ...read more.

The only problem with it being a religious theory rather than a secular one is that the primary precept of 'worshipping God' will not come naturally to those who do not believe in the Christian God, or to atheists/agnostics. The fact that Aquinas maintains that the absolute laws come from God and that we ought to obey them may lead him into the trap of the naturalistic fallacy - obeying God is a value judgement and therefore he is turning and is into an ought. However an advantage is that the theory's emphasis on the purpose of humanity gives people a structure and meaning in their lives, it is humanistic in its assertion that we all have intrinsic worth. Overall I believe that the weaknesses outweigh the strengths of this theory - it fails in its precepts which determine how people should live - people do not all hold the same values and therefore it is presumptuous to say that our morals were given by God and we all share them. It is also interesting that Aquinas himself went against his primary precept of 'reproduction' by being a celibate priest. ...read more.