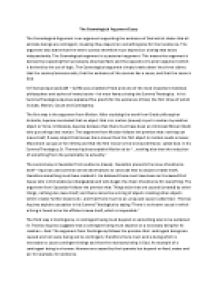 Ultimately, Aquinas believes that there must have been an Unmoved Mover (God) who puts things into motion. The argument from Motion follows the premise that: nothing can move itself, if every object that moves has a mover then the first object in motion needs a mover, Movement can go on for infinity and that the first mover is the Unmoved Mover, called God. In his Summa Theologica, St. Thomas Aquinas explains Motion to be ?...nothing else than the reduction of something from the potentiality to actuality.? The second way is Causation from existence (cause). Causation presents the issue of existence itself ? Aquinas used common sense observations to conclude that no object creates itself; therefore something must have created it. ...read more.