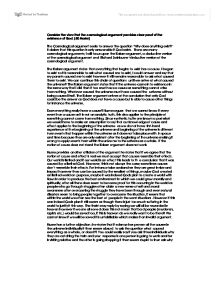 work another is visiting relative and the other is going shopping it then seems stupid to then ask why they are all catching the train. This works for that situation but it does not seem to work for universe as a whole as it still feels as if there are unanswered questions. The Kalam argument states that everything has a beginning but because time comes into existence with the universe, the universe didn't happen at a given time so it has no beginning. However this seems to contradict science which states the universe has a finite past, it is around 15 billion years old. All finite things have a cause, and as time existed only with the universes existence this mean the cause of the universe must be outside of time. For many theists this is not a problem as God could exist outside of time. However would this not infer an almost deistic God who created the universe and left it to its own device, rather than the God of theism who is involved with creation? If the universe has a beginning it could have been caused by another universe in a chain of infinite regress of causes. ...read more.

Swinburne simply states God is good but as we have discussed previously a Good God who uses evil as a tool does not seem to add up. Using Swinburne's definition of God I can still ask what caused God and this is why he is not further than science in explaining the existence of the universe. Now if both science and God leave us with unanswered questions why do we need God at all? Can't we just accept that we explain scientific laws? In conclusion, he Kalam argument seems to fail at clearly proving God by deduction and Swinburne fails at inductively proving God's existence. Maybe there isn't an answer. Bertrand Russell states the universe is just there and people should not seek an explanation as it seems impossible that we will find a sufficient reason for the universe as even explaining the simplest of things, for example striking a match to produce a flame, requires a detailed explanation. However, it still is logical to want an answer. It might seem that Russell has just given up on unlikely odds rather than providing an actual response, at the same time the want for an answer does not mean there is an answer, maybe it is just human nature to be curious. ...read more.