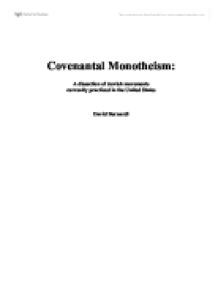 Covenantal Monotheism: A dissection of Jewish movements currently practiced in the United States.

Covenantal Monotheism: A dissection of Jewish movements currently practiced in the United States David Bernardi The covenant of Judaism; a term that is so deep in the practices, beliefs, and history of Judaism that a life-long student scholar of religion would fall short in any attempt to encompass its meaning in mere words or writings. A bond between two. A bond forever unbreakable in the eyes of many, a bond so clear and understood it has directed the lives thousands of generations of people. A bond that has created beauty and life for some yet has brought war and death for others. Judaism is more than a religion. Judaism is a people, a history, a religion, and a culture; a culture that has, over thousands of years, endured years of persecution and has enjoyed years of ideological success. Judaism has also found the ability have a multi-lateral foundation of growth in terms of its beliefs and practices. Judaism has remained amazingly unchanged in practice and belief and has also found strength in evolving with modern times of changing eras. This remarkable feat is the basis of the different movements within Judaism. To examine the meaning of the Covenant of the Jewish religion it is necessary to first have an understanding of the differences that separate and similarities that bind the various movements. The practice of Orthodox Judaism is best described as a very particular Judaic religious system that affirms certain beliefs regarding divine revelation and eternal authority of the Torah, both oral and written. ...read more.

Newly founded, the Reform Movement catered greatly to the many United States immigrants arriving from Europe during the nineteenth and early twentieth centuries. Simply, the Reform Movement does not believe that the Torah was written by God, but by separate sources (man) redacted together. Also, Reform Jews do not believe in the observance of commandments as such, but they do retain much of the values and ethics of Judaism, along with some of the practices and culture. Between Orthodoxy and Reform, a third movement began in the United States. Conservative Judaism attempts to find a centrist position on the values of tradition and change. This movement affirmed a far broader part of the received way of life than Reform, yet it rejected a much larger part of the worldview of the system of the dual Torah than did Orthodoxy. However, Conservative Jews agreed with the Reformers in their basic philosophical position, but also with the Orthodox in their concrete way of life. The stress of Conservative Judaism, also called Historical School in Europe, can be broken down in two matters. First and more importantly, scholarship, with historical research assigned the task of discovering those facts of which the faith would be composed, secondly observance of the rules of the received Judaism. This movement exemplifies orthoprax Judaism, which is defined through works, not doctrine. The Fourth American Jewish Movement that was initiated in he United States began in the early decades of the twentieth century. ...read more.

Since the Jews in exile could not live safe lives physically they agreed with a covenant that would allow them to feel safe spiritually and mentally, demonstrating the argument that religion often is merely fulfilling human need. In turn this exhibits the contention that contemporary Jewish religion was structured on need of the individual. Reform and Reconstructionist movements in Judaism acknowledge the event regarding the giving of the Torah. However, the core beliefs that separate them from Orthodox and Conservative Jews, the idea of religious evolution, further justifies the argument that the roots of the Covenant are based on human need. Judaism services those that need to be serviced by it. Reform and Reconstructionist acknowledge the events that happened at Mount Sinai, further, they also agree that there is a bond between them and God, a covenant. While the events at Mount Sinai are of pivotal meaning to Orthodox and Conservatives and their relationship with God through the covenant, to the Reform and Reconstructionist, the covenant is the pivotal aspect, in spite of what happened at Mount Sinai. The core of their belief, evolution, is justification for their newer "evolved" perspective of what happened at Mount Sinai. At one point it was essential to believe that God gave the Torah directly to Moses, this to serve the need of the individual. However, now the need of the individual is no longer what it was at that time, religious evolution verbatim. ...read more.