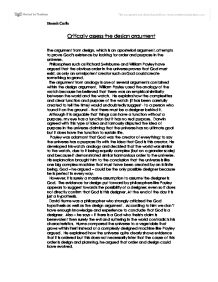 Critically assess the design argument The argument from design, which is an aposteriori argument, attempts to prove God's existence by looking for order and purpose in the universe. Philosophers such as Richard Swinburne and William Payley have argued that the obvious order in the universe proves that God must exist, as only an omnipotent creator such as God could create something so grand. The argument from analogy is one of several arguments contained within the design argument. William Payley used the analogy of the watch because he believed that there was an empirical similarity between the world and the watch. He explains how the complexities and clear function and purpose of the watch (it has been carefully created to tell the time) would undoubtedly suggest - to a person who found it on the ground - that there must be a designer behind it. Although it is arguable that things can have a function without a purpose, my eye has a function but it has no real purpose. Darwin agreed with this type of idea and famously disputed the idea of purpose in the universe claiming that the universe has no ultimate goal but it does have the function to sustain life. Payley was adamant that God was the creator of everything; to say the universe has a purpose fits with the idea that God is this creator. ...read more.

Instead - he claims - the only logical argument for the universe is that it came from chance. Darwin argued that matter organises itself without the need for a mind and intelligence and the apparent appearance of order and design could be due to evolution. He disagrees with Aquinas' idea that the universe works towards some sort of goal instead claiming that as conditions alter the universe simply changes. This evolutionary principle has been compared to a blind watch maker, someone who does not know what they are doing because nature changes and has not been designed by an omniscient being. Darwin's argument shows that it could be possible that the universe just happened without any purpose or ultimate goal. The more complex the development and harmonious order of the universe the more it appears designed even if it originated from random chance. Therefore it is surely indisputable that you can have order without design, like Darwin demonstrates. Significantly Immanuel Kant also disagreed with the idea of a purposeful and ordered universe. He strongly argued that the reason the universe appears so ordered is because our minds organise our experiences to create that belief. He went on to outline how we can never be certain of anything (including reality) and so even if you believe the universe is ordered you can never be truly sure. This is based on the idea of solipsism - a lonely theory - it demonstrates how each person experiences things as an individual and can never share other people's experiences. ...read more.

The arguments from design may be persuasive but they are nothing more than hypotheses compared to actual proofs. Without doubt it is impossible to prove or disprove the arguments for and against design as well as the argument for and against a supreme God behind everything. Bertrand Russell clearly explained how it is impossible to prove or disprove there is a God by using his celestial teapot analogy. The analogy basically states that if you were to claim a china teapot was orbiting the sun people would assume you were talking ludicrously and insist that there was no such teapot. However, if you explained that it was an extremely small teapot that couldn't even be seen by the most powerful telescopes its existence would remain implausible although it wouldn't be disprovable. If the teapot, was based on writing from ancient scripts, had been taught sacredly every Sunday as the undying truth and indoctrinated into children's minds then to question its existence would seem bizarre and those that did would be alienated by society as abnormal. This analogy demonstrates how the hypotheses for and against the existence of the teapot orbiting the sun are improbable but can't be disproved. By using the arguments of this analogy we can surely understand that however much you attempt to prove or disprove the design argument you shall most likely create further hypotheses and come to little or no conclusion. ?? ?? ?? ?? Hannah Crofts ...read more.