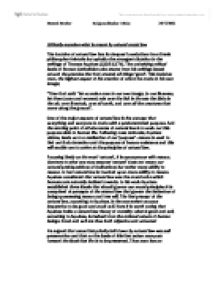 Critically examine what is meant by natural moral law.

Critically examine what is meant by natural moral law The doctrine of natural law has its deepest foundations from Greek philosopher Aristotle but upholds the strongest dictation in the writings of Thomas Aquinas (1225-1274). The underlying ethical basis of Roman Catholicism also stems from his writings based around the premise that God created all things 'good'. This includes man, the highest aspect of his creation of whom he made in his own image; "Then God said: "let us make man in our own image, in our likeness, let them (man and women) rule over the fish in the sea the birds in the air, over livestock, over all earth, and over all the creatures that move along the ground". One of the major aspects of natural law is the concept that everything and everyone is made with a predetermined purpose. And the starting point of all advocates of natural law is to work out this purpose akin to human life. Following ones rationale, Aquinas claims, leads us to a realisation of our 'purpose'- reason is used to find out Gods intention and the purpose of human existence and this will enable one to arrive at the principles of natural law. Focusing firstly on the word 'natural', it is synonymous with reason. Contrary to what one may assume 'natural' does not mean our natural predispositions or inclinations but rather mans ability to reason. In fact natural law is founded upon mans ability to reason. Aquinas considered that natural law was the moral code which humans are naturally inclined towards. ...read more.

If ones gift is to teach then teach....and so one. The problem is of course what happens when one thinks their eschatology is that of an ' apparent good'? They might consider that their personal goals are that of power or like the suicide bombers think that their eschatology is to end their live ion aid of attacking the enemy. Obviously here we have a perversion of ones eschatology. Natural law claims that reason illustrates to us their limitations. 'Apparent goods' are destructive to one and others and disgrace or degrade man. So the question arises that why do so many of us follow an 'apparent good'? Aquinas would argue that it is in opens weak nature that it is far easier to follow what one desires and gets pleasure out of, and once tempted, one is stuck in the intoxication. 2) analyse and evaluate the strengths and weaknesses of natural law as a definitive ethical theory. The premise of natural law states that morality is based on reason alone, but surely if we look around us it is actually based on our emotions? David Hume (1713-1776) was a philosopher that disagreed with the notion that morality is based on reason alone. As we have seen, Aquinas believed that natural law was synonymous with mans reason; Hume powerfully argued that if this is so then why do people have such a diverse perception of what is right and wrong, good and bad? Surely if morality is reason based then we would all have the same ideas of what is good and bad? ...read more.

There is a desire to believe in something beyond bodily death. The existence of so many religions seem to prove this point. It could be looked upon like this; are we, as Sartre says condemned to be free, or does existence really have an underlying purpose and meaning? Like I mentioned earlier, we now live in a secular age. However we cant seem to get away from 'god' or 'gods'. We basically invent gods like science and medicine. Surely this seems to indicate that our existence requires some foundation beyond our own means? In regards to 'apparent goods' Aquinas claims that they are self destructive despite the 'miracle' cures of modern society. The questions arises that will society ever create an earthly paradise where all pleasures are catered for. Will we ever make the 'paradise' that temps us away from reasoning or will we find that it's not enough. It would be that if paradise can never be created then it reinforces the idea of 'apparent goods' In conclusion I would be inclined not to follow natural law. Although it raises many valuable and appraisable points (after all it does strive for what's moral) I feel as though it is far too orthodox and strict for my liking. It seems to have too much of Aquinas's desires and seems irrelevant for today's society. As a definitive ethical theory I suggest that it doesn't uphold what I would determine or expect a definitive ethical theory to be. I feel it has too many gaps that have un suggestive answers, the fact that it hasn't made me feel as though I can relate to it as a moral theory says it all. Hannah Hawker Religious Studies- Ethics 29/11/2002 ...read more.