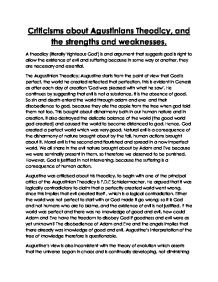 Criticisms about Agustinians Theodicy, and the strengths and weaknesses.

Criticisms about Agustinians Theodicy, and the strengths and weaknesses. A theodicy (literally 'righteous God') is and argument that suggests god is right to allow the existence of evil and suffering because in some way or another, they are necessary and essential. The Augustinian Theodicy; Augustine starts from the point of view that God is perfect, the world he created reflected that perfection, this is evident in Genesis as after each day of creation 'God was pleased with what he saw'. He continues by suggesting that evil is not a substance, it is the absence of good. So sin and death enterd the world through adam and eve and their disobedience to god, because they ate the apple from the tree when god told them not too. ...read more.

We all share in the evil nature brought about by Adam and Eve because we were seminally present in them, so therefore we deserved to be punished. However, God is justified in not intervening, because the suffering is a consequence of human action. Augustine was criticised about his theodicy, to begin with one of the principal critics of the Augustinian Theodicy is F.D.E Schleiermacher. He argued that it was logically contradictory to claim that a perfectly created world went wrong, since this implies that evil created itself , which is a logical contradiction. Either the world was not perfect to start with or God made it go wrong; so it is God and not humans who are to blame, and the existence of evil is not justified. ...read more.

Augustine's view is also inconsistent with the theory of evolution which asserts that the universe began in chaos and is continually developing, not diminishing over time. Also Augustine's view that every human in seminally present in the loins of Adam is biologically inaccurate. The last criticism, is a moral one within Augustinian's theodicy which concerns his concept of hell. Hell appears to be a part of the design of the universe which implies that God must have already anticipated that the world would go wrong, and have accepted it. Hell is a place of eternal suffering, so therfore it seems to contradict the existance of an all loving God. Finally, although Augustine argued that God's selection of some people for heaven shows his mercy, others would argue that it displays irrational inconsistency, further questioning God's existence. ...read more.