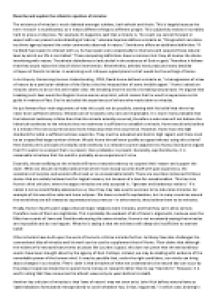 Describe and explain the atheistic rejection of miracles

Transfer-Encoding: chunked ﻿Describe and explain the atheistic rejection of miracles The existence of miracles is much debated amongst scholars, both atheist and theist. This is largely because the term ?miracle? is multifaceted, as it means different things to different people. This subjectivity makes it incredibly hard to prove or disprove. For example, St Augustine said that a miracle is, ?An event we cannot forecast or expect with our present understanding of nature,? whereas Aquinas defines a miracle as, ?things which are done by divine agency beyond the order commonly observed in nature.? Swinburne offers an additional definition: ?If he (God) has reason to interact with us, he has reason very occasionally to intervene and suspend those natural laws by which our life is controlled.? These competing definitions have a common link: they all involve the divine interfering with nature. The atheist disbelieves or lacks belief in the existence of God or gods. ...read more.

Here Swinburne?s principle of credulity and testimony is a relevant counter argument to Hume; Swinburne argued that if it seems to a subject that x is present, then probably x is present. Generally, says Swinburne, it is reasonable to believe that the world is probably as we experience it to be. Secondly, those testifying to the miracle will have a natural tendency to suspend their reason and support the claim. While we should normally believe that which most closely accords itself with past experience, the sensations of surprise and wonder often lead us to unreasonable beliefs. There are countless instances fictitious stories that are widely believed not for logical reasons, but because of a love for sensationalism. This ties into Hume?s third criticism, where he argues miracles are only accepted in, ?ignorant and barbarous nations.? If a nation is not as scientifically advanced as us, then they may take events we know to be natural as miracles. ...read more.

Another key criticism of miracles is that ?laws of nature? may not even exist. John Hick defines natural laws as ?generalisations formulated retrospectively to cover whatever has, in fact, happened,? in which case, bearing in mind that a miracle is a breech of the natural law, he argues, ?We can declare a priori that there are no miracles.? Upon this basis, the occurrence of an unusual, previously unwitnessed event should make us widen our understanding of the natural law so as to incorporate the possibility of the new event. If we take every new event as a miracle we will never be able to learn and expand our knowledge about nature. Ultimately, atheists accuse theists of being ignorant when it comes to miracles. Just because you can?t explain an occurrence doesn?t mean that it is an act of God. New things are being discovered about nature and how it functions all the time. What we believe to be impossible now may be proven otherwise in the future. To quote Atkins, ?To believe in miracle is intellectual suicide.? ...read more.