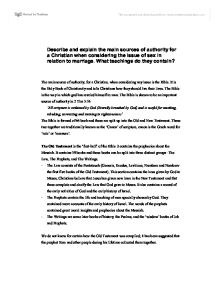 Describe and explain the main sources of authority for a Christian when considering the issue of sex in relation to marriage. What teachings do they contain?

Describe and explain the main sources of authority for a Christian when considering the issue of sex in relation to marriage. What teachings do they contain? The main source of authority, for a Christian, when considering any issue is the Bible. It is the Holy Book of Christianity and tells Christians how they should live their lives. The Bible is the way in which god has reveled himself to man. The Bible is shown to be an important source of authority in 2 Tim 3:16 'All scripture is ordained by God (literally breathed by God) and is useful for teaching, rebuking, correcting and training in righteousness' The Bible is formed of 66 book and these are split up into the Old and New Testament. These two together are traditionally known as the 'Canon' of scripture, canon is the Greek word for 'rule' or 'measure'. The Old Testament is the 'first-half' of the Bible it contains the prophecies about the Messiah. It contains 39 books and these books can be split into three distinct groups- The Law, The Prophets, and The Writings. - The Law consists of the Pentateuch (Genesis, Exodus, Leviticus, Numbers and Numbers- the first five books of the Old Testament). ...read more.

Besides finding out information about their faith they hope to sense the inner guidance of God through reading the words of scripture The Bible contains many teachings on sex and marriage Marriage; According to the Bible marriage is ordained by God (Gen2: 24), it is a covenant between the two people and God (Hos2) which is binding (1Cor7: 10-11). Marriage should be Christian (1Cor7: 39 and 2Cor6: 14). It is a spiritual bond between two people (1Cor7: 2), but it is also recognised as a sexual relationship (1Cor7: 3-5) which is meant to be exclusive (1Cor7: 2 and Ex20: 14 - " Thou shall not commit adultery"). Christianity also recognises the problematic nature of marriage (1Cor7: 28). Jesus has little to say on the subject of marriage, but he did attend a wedding in Cana where he performed his first miracle, turning water into wine, allowing the marriage to continue and be joyous, thus he is clearly in support of marriage. He did say that there would be no marriage in heaven (Matt22: 30). Sex; God created sex and therefore the first sexual though in the world was his (Gen1: 27), god commanded man to have sex (Gen1: 28 "Be fruitful and multiply"). ...read more.

Christians may read them when considering the issue of sex and marriage because they contain the Marriage service, which is important as a source of authority as it contains the commitment that couples are making to each other. The service reinforces the fact that marriage is ordained by God; 'Marriage is intended by God to be a creative relationship, as his blessing enables husband and wife to support each other' 'Marriage is a gift of God' It states that marriage is a spiritual and physical bond; 'They shall be united with each other in heart, body and mind.' It recognises the sexual nature of marriage; 'In the delight and tenderness of sexual union' It emphasises that marriage is exclusive; 'Forsaking all others, be faithful as long as you both shall live' Christians may also take on board the advice of Church leaders and other Christians when referring to the issue of sex and marriage, because they are able to relate to one another on the grounds of mutual beliefs. Quotes from famous Christians such as Martyn Luther or Lewis Carol may help Christians reach their understanding of whether it is justifiable for a Christian to have sex outside marriage. The teachings offered by these sources will depend on the views of person drawn upon. ...read more.