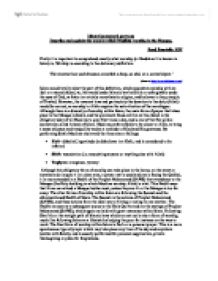 Describe and explain the ways in which Muslims worship in the Mosque.

Islam Coursework part one Describe and explain the ways in which Muslims worship in the Mosque. Read Baurtally 10W Firstly it is important to comprehend exactly what worship (or Ibadah as it is known in Islam) is. Worship is according to the dictionary definition: 'The reverent love and devotion accorded a deity, an idol, or a sacred object.' (Source: http://www.dictionary.com) Islam would totally reject the part of this definition, which associates worship with an idol or a sacred object, as, this would under Islamic law be Shirk or unforgivable under the eyes of God, as Islam is a strictly monotheistic religion, and believes in the principle of Tawhid. However, the reverent love and particularly the devotion to the deity (Allah) would be correct, as worship to Allah requires the sole attention of the worshipper. Although there is a diversity of worship within Islam, the main form of prayer that takes place in the Mosque is Salah, and the prominent focus will be on this. Salah is the obligatory duty of all Muslims to pray five times a day, and is one of the five pillars (sometimes called Arkan) of Islam. Muslims perform Salah to be closer to Allah, to bring a sense of peace and tranquillity and as a reminder of God and His greatness. By performing Salah Muslims also avoid the three sins or failings: * Kufr- disbelief, ingratitude (a disbeliever is a Kafir, and is considered to be inferior) * Shirk- association (i.e. associating anyone or anything else with Allah) ...read more.

Move the palm of the wet hand over the head, starting from the top of the forehead to the back and pass both hands over the back of the head to the neck 8. Rub wet fingers into the grooves of both ears and holes and also pass the wet thumbs behind the ears 9. Pass the backs f the wet hands over the nape (back of neck) 10. Wash both feet to the ankles starting from the right and making sure that water has reached between the toes and all other parts of the feet. After completing Wudu, the Shahadah is said, again to put the Muslim in the right state of mind for praying. The whole process of Wudu may be performed in the Mosque where a wash room is usually provided. The washing will do for more than one prayer providing there is no breaking of it i.e. urination or the breaking of wind and even bleeding, or if the mind has lost conscious control i.e. falling asleep or being knocked unconscious. However, in special cases and before Friday prayer (Jum'uah) Ghusl is needed, which is more like a shower and is a full body wash. Jum'uah is certainly the most important prayer at the Mosque, and attendance to the Mosque is required more than any other prayer. This is because Muslims are required to meet up in Ummah (or as a community) to share and discuss Islamic matters. Ghusl is also required after a sexual act, or after a period. ...read more.

Their backs should be straight. This physical action is done to show that they respect as well as love God. Whilst in the Ruku position they repeat three times: 'Glory be to my Great Lord, and praise be to him' 8. They then stand up in Qiyam and acknowledge their awareness of God with the words: 'God always hears those who praise Him. O God, all praise be to Thee, O God greater than all else.' 9. The humblest position is called sujud or sajda. This is where Muslims prostrate themselves on the ground, demonstrating that they love God more than they love themselves. When kneeling they ensure that their forehead is touching the floor to show their humility in front of the Almighty Allah. They repeat this twice. 10. Steps one to nine form a Rakah. This is known as a unit of prayer, and this is often repeated to form two rakahs, three (salat'ul Witr) or even four rakahs. At the end of the rakah(s), Muslims then say a Du'a, which is explained in my introduction. The last action of the prayer is the action to turn ones head left and right to acknowledge the other worshipers and the guardian angels (who note ones bad and good deeds respectively) with the words: 'Peace be with you, and the mercy of Allah.' So in conclusion to this we can see that Salah forms a major part of a Muslims life. The additional aspect of praying at the Mosque is also important, and this is reinforced by the aforementioned Hadith. By praying Muslims also say the Shahadah which is another pillar of Islam, which shows how important these liturgical acts are to following Islam. ...read more.