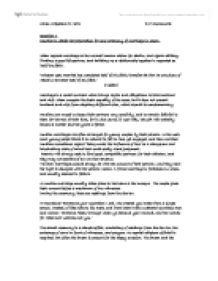 Describe in detail the preparation for and ceremony of marriage in Islam.

Question 1 Describe in detail the preparation for and ceremony of marriage in Islam. Islam regards marriage as the normal human status for adults, and rejects celibacy. Finding a good life partner, and building up a relationship together is regarded as 'half the faith'. 'Whoever gets married has completed half of his faith; therefore let him be conscious of Allah in the other half of his faith.' (Hadith) Marriage is a social contract which brings rights and obligations to both husband and wife. Islam supports the basic equality of the sexes, but it does not prevent husband and wife from adopting different roles, which should be complementary. Muslims are urged to choose their partners very carefully, and to remain faithful to them for the rest of their lives, for in due course, if God wills, the girl will probably become a mother and the youth a father. Muslim marriages are often arranged for young couples by their parents. In the west, most young people think it is natural to fall in love, get engaged, and then married. Muslims sometimes regard 'being under the influence of love' as a dangerous and intoxicating state of mind that could easily cloud judgment. ...read more.

Marriage and family life are considered to be very important in Islam. Traditionally the man's duty is to go out to work to support the family and the woman's duty is to bring up the children and look after the house. The father makes the main decisions whilst the mother is important within the home and must be shown respect by her husband and children. This is seen as the natural order of things and the way Allah intended men and women to live. Muslims regard the family as the basis for the human race, culture, society and civilization. They accept it as an institution founded by God and intended to give a secure atmosphere for the growth and progress of all its members. Anything which weakens or disrupts it is therefore regarded as a serious matter. The home is considered to be far more important, sacred, creative and rewarding than any place 'outside'. The family is a complex interwoven unit consisting of many people. It is not just a husband and wife plus their parents and children. It includes brothers and sisters, uncles and aunts and cousins. ...read more.

Although certain restrictions exist on such marriages, especially if they occur in non-Muslim lands where Islamic law and religion is not prevailing. A Muslim man can marry a woman from their ranks on same terms as he would marry a Muslim woman, i.e. he must give her an economic and moral status, and must not actuate merely by motives of lust and physical desires. A Muslim woman cannot marry a non-Muslim primarily because her religious affiliation and duties will be affected by the authority of her husband. A non-Muslim woman marrying a Muslim man is expected to eventually accept Islam. Any man or woman, from any race or faith, upon accepting Islam can freely marry any Muslim, man or woman, provided the objective is purity and chasteness and not lewdness. 'Do not marry only for a person's looks; their beauty might become the cause of moral decline. Do not marry for wealth, since this may become the cause of disobedience. Marry rather on the grounds of religious devotion.' (Hadith) The aim in marriage is that the partner should also be one's 'best friend', the one who shares the concerns and responsibilities of life, who offers peace, comfort and rest, and who helps to bear difficulties which are too much to be faced alone. Kiran Kripalani 11.2CS R.E Coursework ...read more.