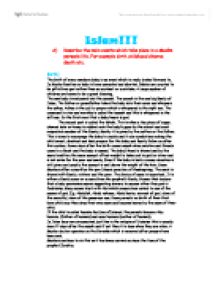 Islam!!! A) Describe the main events which take place in a Muslim person's life. For example birth childhood divorce death etc. Birth!! The birth of every newborn baby is an event which is really looked forward to. In Muslim families no baby is born unwanted and aborted. Babies are counted to be gifts from god rather than an accident or a mistake. A large number of children are known to be a great blessing. The new baby is welcomed into the ummah. The ummah is the one big family of Islam. The father or grandfather takes the baby into their arms and whispers the adhan. Adhan is the call to prayer which is whispered in the right ear. The command to rise and worship is called the iqamah and this is whispered in the left ear. So the first word that a baby hears is god. The second part is called the tahnik. This is when a tiny piece of sugar, chewed date or honey is rubbed onto the baby's gums by the eldest and most respected member of the family. Mostly it is given by the mother or the father. This is done to encourage the baby to suckle and it also symbolises making the child sweet, obedient and kind prayers for the baby and family follow on after this custom. Seven days after the birth comes aqiqah when relative and friends come to a feast and the baby is named. The baby's head is shaved and by the same tradition the same amount of hair weight is taken out in gold or silver and is set aside for the poor and needy. ...read more.

The first wife's permission has to be asked before marring another wife and the second time both wives have to agree. Without their permission a man is not allowed into another marriage. One of the reasons that polygamy isn't very common is because all the wives have to be treated equally and that is not possible in many cases. Divorce!! Divorce is disliked but is permitted and is easy to obtain under Islamic law. Muhammad said that divorce was the most hateful of permitted things and Muslims should try and avoid this and try to make out till their final decision. Their families usually do their best to keep their marriage going, since they were the ones who arranged it in the first place. If the couple cannot work things out then they should get two arbitrators to help one representing each party. If the couple do decide to get divorced they must wait three months to see whether the woman is pregnant since the husband must provide for the children of the marriage. On divorce the marriage dowry must be paid in full, unless it was the woman who wanted the divorce and was at fault. Generally Muslim women can ask for divorce only if they had this right written into the marriage contract. Divorce is regarded as a very serious thing because it accepts human nature and recognises that a marriage may not work. It is considered better to divorce and then remarry then carry on with an unhappy marriage and possibilities of committing adultery. ...read more.

Light upon light. Allah guides to His light Whoever wills (to be guided). Allah thus cites the parables for the people. Allah is fully aware of all things." [24:35] Husband and wife together: God, take our will and our life. Guide our marriage. Show us how to live. Our best wishes to the couple. 3) "For Muslims giving zakaat is a waste of money" Do you agree? Give reasons to support your answer and show that you have thought about different points of view. I think giving zakaat is a waste of money due to the following reasons: * Because rather than wasting it on poor people you can spend it on yourself to buy something of your own wish. * These people are not related to us we don't know who they are so why give them in the first place. * Money is for us we earn so why should we put effort into work and then spend it on others. I think giving zakaat is not a waste of money due to the following reasons: * We spend money on ourselves although we have enough so why cant we spend on people who have nothing to own * You are doing a act in which you will get a reward later in life * If you spend it then you will get more money * You are making someone happy this makes you feel good and makes you feel that you are helping your own people Overall I think that giving zakaat is a good idea and that as a Muslim this is my duty and I am happy with this. M u L L i ...read more.