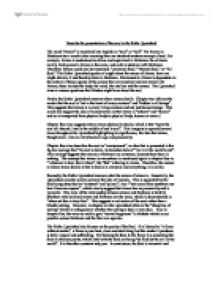 Describe the presentation of the soul in the Katha Upanishad.

Describe the presentation of the soul in the Katha Upanishad The word "Atman" is translated into English as "soul" or "self." Yet Atman in Hinduism has a much richer meaning than our standard western concept of soul. For example, Atman is understood as divine and equivalent to Brahman, the ultimate reality. Each person's Atman is the same, and each is identical with Brahman. Therefore Atman could also be translated, "Universal Soul," "Eternal Soul," or "All-Soul." The Katha Upanishad speaks at length about the nature of Atman, how one might attain to it and thereby attain to Brahman. Attainment to Atman is dependent on the control of those aspects of the person that are transitory and not eternal like Atman; these include the body, the mind, the intellect and the senses. The Upanishad aims to answer questions that Hindus might have about the soul. ...read more.

The concept that atman is everywhere is mentioned again in chapter four in " whatever is here, that is there", the "that" referring to atman. Therefore, the answer to where atman dwells is that it dwells in everyone and everything, it is reality. Secondly, the Katha Upanishad answers what the nature of atman is. Essentially, the Upanishad could be said to promote the idea of monism. This is supported by the Soul being described as "constant" and "primal", also ""not come from anywhere nor has it become anyone", which clearly suggest that atman has no personality and is immortal. This view of the relationship between atman and Brahman is held by Shankara who believed atman and Brahman are the same, which is demonstrated in "when set free is truly free". This suggests a realisation of the soul rather than a blissful uniting. However, in chapter six the Upanishad refers to the "discipline of uniting" which is ambiguous to whether the uniting is dual or non-dual. ...read more.

Each of these aspects of the person, including Atman itself, is likened to some part of the chariot. It is thus shown that Atman or the soul is what gives the body purpose and life, and that control of the mind and the senses results in a knowledge of the universal soul and, likewise, ultimate reality. Secondly, the Upanishad suggests that through yoga, particularly Jaina yoga, liberation can also be achieved. Chapter six suggests this in that "above the mind is true being" or spiritual knowledge which can be found through Jaina yoga. This is also reflected in the last lines of the Upanishad "so may any other who knows this concerning the soul." This is also supported by the emphasis put on that the Soul can not be known "by reasoning" or "be attained by instruction nor by intellectual ability nor by much learning." This suggests that it is only spiritual knowledge, attained through Jaina yoga that can allow someone to know the "unknowable" Soul. ...read more.