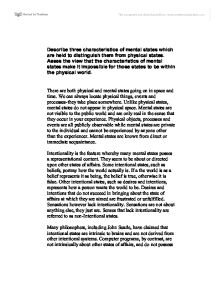 Desires and intentions that do not succeed in bringing about the state of affairs at which they are aimed are frustrated or unfulfilled. Sensations however lack intentionality. Sensations are not about anything else, they just are. Senses that lack intentionality are referred to as non-Intentional states. Many philosophers, including John Searle, have claimed that intentional states are intrinsic to brains and are not derived from other intentional systems. Computer programs, by contrast, are not intrinsically about other states of affairs, and do not possess genuine underived intentionality. The contents of such programs only exist because we are there to interpret the programs. In a world without minds, things such as computer games would lack content, as would language, books and symbols in general. ...read more.

Non-intentional states and physical states do not appear to be holistic. This is because they are atomistic, meaning that they stand alone and do not imply the existence or non-existence of anything else. There is a difference between 1st and 3rd person perspectives which helps mark the difference between mental and physical states. To give a description of yourself you do not need to look at yourself in the mirror or study yourself in depth. You have automatic access to your thoughts and feelings. Another person wishing to describe you however does not have access to your thoughts and feeling and must therefore study your character in depth. They can only guess at what your mental belongings are as they are private to the individual and cannot be viewed by any test or scan. ...read more.