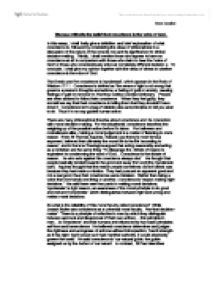 Discuss critically the belief that conscience is the voice of God.

Discuss critically the belief that conscience is the voice of God. In this essay, I shall firstly give a definition and brief explanation of what conscience is, followed by considering the views of philosophers in a discussion of the nature of the conscience and its significance for ethical decision-making. Thirdly, I shall mention those who appear to have no conscience at all in comparison with those who claim to hear the 'voice of God' or those who conscientiously arrive at completely different decisions. To conclude, I shall give my opinion together with the views of others to whether conscience is the voice of God. The Greek word for conscience is 'synderessi', which appears in the Book of Wisdom 17:11. Conscience is defined as 'the sense of right and wrong that governs a person's thoughts and actions, a feeling of guilt or anxiety, causing feelings of guilt or remorse' in The New Collins Concise Dictionary. People are often advised to follow their conscience. When they feel guilty, they sometimes say that their conscience is telling them that they shouldn't have done it. Conscience isn't a bag of reliable rules and principles to tell you what to do. Thus it in no way guides human action. There are many philosophical theories about conscience and its connection with moral decision-making. ...read more.

Christians believe that this inner voice is the voice of God speaking to them, often as the result of prayer. They believe that as human beings are far from perfect they cannot act without God's help or grace. Many Christians believe the voice of God is the most powerful force in nature, indeed the only force in nature, for all energy is here only because the power-filled Word is being spoken. The Bible is the written word of God, and because it is written it is confined and limited by the necessities of ink and paper and leather. The voice of God, however, is alive and free as the sovereign God is free. There are various examples in the Bible in which the conscience is most apparent. Adam and Eve, for example, having tasted the forbidden fruit, felt ashamed and hid with the intention of concealing themselves from God (Genesis 3:7-10). Some conscience became so unbearable it led to cutting short of ones life, for example, the traitor Judas, who hung himself after he had betrayed Jesus Christ to the chief priests of the Jews (Matt 27:5). To many people, conscience is almost all that they have by way of knowledge of God. This still small voice which makes them feel guilty and unhappy before, during or after wrong-doing is God speaking to them. ...read more.

But today we know better; we know slavery is grossly immoral. Our sense of right and wrong is inculcated. It is taught to us by society, and it becomes part of our belief system. Although society shapes us, we also shape society. Some of the more free-thinking among us question things. They rebel and reform society, so future generations are brought up with consciences more accustomed to the Will of God. Conscience, then, is not the voice of God but His gift. It is a mechanism that evaluates the worthiness of our desires, urges, and actions. It is a moral compass that points to goodness and excellence, as it is understood at that time. It is dangerous to believe our conscience is the Voice of God, for when we do so; we use an unenlightened or tainted conscience to justify, slavery, genocide, war, and other atrocities. To conclude, I do not firmly believe that conscience is the voice of God. Mainly because of the difficulties which arise with conflicting consciences. There are a number of religions with competing claims about truth, making people sincerely believe different things on a wide variety of ethical and religious issues. Also, atheists say that conscience is very important to them and if they do not believe in God then how can conscience be the voice of God? Surely if conscience was the voice of God then atheists would find it hard to have conscience in their lives. ?? ?? ?? ?? Rosa Lenders ...read more.