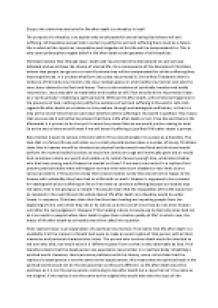 ﻿Discuss the claim that any belief in life after death is a theodicy in itself. The purpose of a theodicy is to explain why an all-powerful and all loving God allows evil and suffering. All theodicies accept that in order to justify this evil and suffering there must be a future life in which all the injustices, inequalities and tragedies of this life will be compensated for. This is why some philosophers regard belief in life after death as the greatest of all theodicies. Christians believe that through Jesus? death and resurrection (the Atonement) sin and evil was defeated and we all have the chance of eternal life. As a consequence of the Atonement Christians believe that people can go on to a next life where they will be compensated for all the suffering they have experienced. It is unclear what form Jesus was resurrected in, in the New Testament there is evidence of full body resurrection, like Jesus raising Lazarus in a full bodily resurrection and also the risen Jesus claimed to be flesh and bones. There is also evidence of spiritually transformed bodily resurrection, Jesus was able to materialise and localise at will. Paul described the resurrection body as a ?spiritual body? inhabiting a spiritual world. Without life after death, a life of eternal happiness in the presence of God, nothing can justify the existence of evil and suffering in the world. ...read more.

If the replica is not the same as the original this would also raise the issue of the appropriateness of divine judgement of such a being, is it fair to judge a replica on the actions of the original person if this then means the replica is to spend forever in hell for things which they have not done or is it right for a replica to gain the reward of heaven if they did not do such actions worthy of heaven. If a replica cannot be held responsible for the actions of the original person then any idea of life after death as a theodicy collapses. Christians have traditionally believed that when people die they go either to heaven or hell. Heaven is seen as a place of eternal happiness where people are continually in the presence of God. It is seen as the ultimate goal of human existence, life after death in heaven is something people have to achieve through their actions in life. Hell is seen as a place of separation from God involving eternal punishment for all sins we made throughout our life. However belief in heaven and hell raises a number of questions with regard to the problem of evil. Can the existence of hell, with eternal punishment be compatible with a perfectly loving and perfectly just God? It is hard to imagine any sin where eternal punishment with no chance of parole would be a fair punishment. ...read more.

They argue that it is unjust for someone to suffer bad consequences as a result of crimes or faults they cannot remember committing. Also if someone is to learn from their past lives to make a better present life how is that to happen if they cannot recall events from their previous lives which caused them to have the life they have now. Even in the space of one lifetime, many argue that it is unjust to punish people for wrongs that were committed long in their past, when they are different people now and have learned a lot since then. Belief in life after death is central to the problem of evil on the grounds that if beyond this life there was no hope of ?reward? or no judgement there would appear to be little point to all the suffering in the world. However, the whole idea of life after death as a theodicy or solution to the problem of evil only works if you are prepared to accept that innocent suffering is a worthwhile price to pay for our reward later. Dostoyevsky was one person not willing to accept this, he claimed that there is no relationship between any theodicy and a possible next life, no future happiness in a next life can justify the suffering of even one innocent person in this life. If like Dostoyevsky we do not accept that we have to suffer in order to reap the benefits then life after death fails as an answer to the problem of evil. ...read more.