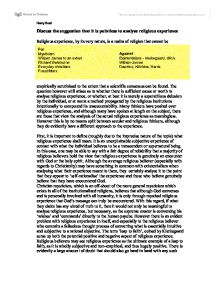 Discuss the suggestion that it is pointless to analyse religious experience

Discuss the suggestion that it is pointless to analyse religious experience Religious experience, by its very nature, is a realm of religion that cannot be empirically scrutinised to the extent that a scientific consensus can be found. The question however still arises as to whether there is sufficient cause or worth to analyse religious experience, or whether, at best it is merely a superstitious delusion by the individual, or at worst a method propagated by the religious institutions intentionally to compound its unaccountability. Many thinkers have posited over religious experience, and although many have spoken at length on the subject, there are those that view the analysis of the actual religious experience as meaningless. However this is by no means split between secular and religious thinkers, although they do evidently have a different approach to the experience. First, it is important to define (roughly due to the imprecise nature of the topic) what religious experience shall mean. It is an unexplainable subjective experience of contact with what the individual believes to be a transcendent or supernatural being. In this case, one may be able to say with a fair degree of reliability that a majority of religious believers hold the view that religious experience is genuinely an encounter with God or the holy spirit. Although the average religious believer (especially with regards to Christianity) may have something in common with existentialism when analysing what their experience meant to them, they certainly analyse it to the point that they appear to 'self-rationalise' the experience and those who believe genuinely believe that they have encountered God. ...read more.

Richard Dawkins, who is vehemently opposed to religion and religious experience on the grounds of their being very little evidence for the existence of God in the first place. He states that even if a person did encounter a 'religious experience' there is nothing to suggest that it is religious based rather than any other phenomenon of biology or the unknown. However Dawkins allowed Dr. Persinger to stimulate his temporal lobe to see if he could stimulate the feeling of a religious experience; and Dawkins stated that although he felt shortness of breath, he felt no religious experience. Thus religious experience, although evidently hugely meaningful for a great number of people, is ultimately subjective. To propose scientific empirical analysis of what is essentially a mystical and wholly unfalsifiable phenomenon is to misunderstand the nature of scientific analysis. One should not confuse objectivity and rational logic with the idea of mystical feeling, and as such the nature of religious experience in itself should not be analysed. However, where the existentialists are correct, is that religious experience provides a great deal of meaning and benefits to those who believe in it, and as such their responses and the good and bad that can result is worthy of analysis. Religion, regardless of its validity, exists in the world; its real world effects and impact should always be analysed and scrutinised so that we can judge it just like any other field of humanity. Harry Hurd Harry Hurd ...read more.