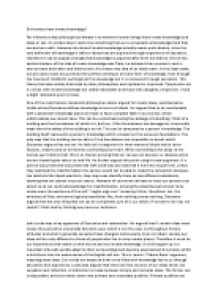 Do humans have innate knowledge?

Transfer-Encoding: chunked ﻿Do humans have innate knowledge? For millennia a key philosophical debate is to whether human beings have innate knowledge and ideas or not. An innate idea is said to be something that we is universally acknowledged and that we are born with. However the idea of innate knowledge actually seems quite bizarre, since the very definition of knowledge is skills or ideas that are acquired through experience of education, therefore it can be argued strongly that knowledge is acquired after birth not before. One of the earliest backers of the idea of innate knowledge was Plato, he believed that a person?s soul is ever-present both after and before birth. His theory was that of an ideal realm. In the ideal realm, we are said to have encountered the perfect archetype of every form of knowledge, then through the trauma of childbirth we forget all the knowledge but it is recovered through education. This theory has been widely dismissed by later philosophers and replaced or improved. People who are in unison with innate knowledge are called rationalists and those who disagree, empiricists. I hold a slight rationalist point of view. One of the most famous rationalist philosopher whom argued for innate ideas, was Descartes. Unlike others Descartes defines knowledge in terms of doubt. He argued that to be comfortable with a posteriori knowledge alone we have to have complete faith in our senses, which unfortunately we cannot have. ...read more.

Even in today?s society our ideas will be very different to those of people who live in very remote places. Therefore it must be our experiences that make us who we are and not innate knowledge. A child bought up in a mountain tribe will quickly adapt to their surroundings and become experienced at survival, whilst a child born into the aristocracies of the English will not. This is Locke?s ?Tabula Rasa? argument, meaning blank slate. Our minds are empty at birth to be filled with knowledge fed to us through education and experience. Locke also argued that there are two sources of our ideas which are sensation and reflection. A distinction is made between simple and complex ideas. The former are undisputable, and are broken down into primary and secondary qualities. Primary qualities are essential for the object in question to be what it is. Without specific primary qualities, an object would not be what it is. Primary qualities are those that convey fact such as motion and solidity. Whereas secondary are those that are thought to bring about properties that produce sensations in observers, such as colour, taste, smell, and sound. Locke also argued that if we were born with an understanding of everything or at least some things then even the most dim-witted person would have the ability to understand things such as geometry, which unfortunately they don?t. ...read more.

Some may say that Chomsky?s statement that children are faced with poverty of stimulus s whimsical and completely false. As unlike the minds of adults, the minds of children are not cluttered. Non-cluttered minds, or as John Locke argued brain with a blank slate, can take more input and absorb it quickly. This may be the reason that children can pick up language so fast without a language acquisition device. Therefore language can be picked up purely from sensory experience rather that from innate ideas of language. In conclusion, even though rationalism has one more entity, in innate knowledge that exists therefore going against Occam's Razor whom believed that the simplest explanation is the correct one, I believe in a rationalist point of view. As from a young age humans are capable of extraordinary things such as the mastery of a language which may not be possible without innate ideas of language. Furthermore our five sense of which empiricists rely cannot give us a sense of right and wrong or morality in general. This knowledge must be built in before birth. Finally our knowledge of perfection, whether in nature or perfect triangularity has not come from our experience for we have never seen two completely straight lines, yet we can still identify what two perfectly straight lines would look like. This is where my opinion of innateness comes from, or maybe it was always there? ...read more.