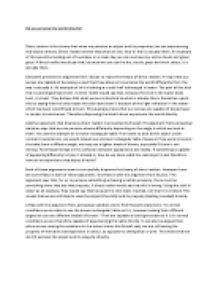 Do we perceive the world directly?

﻿Do we perceive the world directly? Direct realism is the theory that when we perceive an object and its properties, we are experiencing that object directly. Direct realists believe that what we see, hear or feel is actually there. An example of this would be looking out of a window on a clear day; we can see blue sky, white clouds and green grass. A direct realist would say that, because we can see the sky, clouds, grass and their colour, it is actually there. Descartes presents his argument from illusion to reject the theory of direct realism. He says that our senses are capable of deceiving us and that they allow us to perceive the world differently from the way is actually is. An example of this is looking at a stick half submerged in water. ...read more.

However if we were to look at the table from a different angle, we may see a lighter shade of brown, especially if there is sun shining. Here Russell brings in the confusion between appearance and reality. If something is capable of appearing differenty to how it actually is, how do we know what the real object is and therefore how do we experience that object directly? Both of these arguments seem to successfully disprove the theory of direct realism. However there are some flaws in both of these arguments. One flaw is with the argument from illusion. This argument says that, for us to perceive something as having a certain property, there must be something there that has that property. A direct realist would say that this is wrong. Using the stick in water as an example, they would say that because the stick looks crooked, not that it is crooked. ...read more.

This argument says that when we dream, we are fooled by all of our senses at once. While we are dreaming, we are capable of experiencing objects and their properties. As we are not experiencing this object directly, Descartes says that what we are experiencing is sense data (meaning the concept of our perceptions). While we are asleep, it is impossible to distinguish between dreams and veridical variation (seeing something in real life). Therefore Descartes' believes that what we experience in dreams and reality is sense data and not the actual object. It is the strength in the last argument that allows us to say that we do not perceive the world directly, at least not in all cases. It makes more sense to say that what we experience is sense data rather than the physical object. This theory allows us to experience things in both dreams and reality. ...read more.