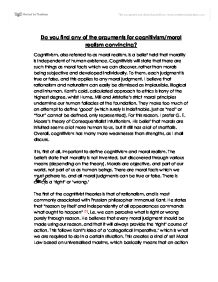 Do you find any of the arguments for cognitivism convincing?

Do you find any of the arguments for cognitivism/moral realism convincing? Cognitivism, also referred to as moral realism, is a belief held that morality is independent of human existence. Cognitivists will state that there are such things as moral facts which we can discover, rather than morals being subjective and developed individually. To them, each judgment is true or false, and this applies to any moral judgment. I believe that rationalism and naturalism can easily be dismissed as implausible, illogical and inhuman. Kant's cold, calculated approach to ethics is irony of the highest degree, whilst Hume, Mill and Aristotle's strict moral principles undermine our human fallacies at the foundation. They make too much of an attempt to define 'good' (which surely is indefinable, just as "red" or "four" cannot be defined, only represented). For this reason, I prefer G. E. Moore's theory of Consequentialist Intuitionism. His belief that morals are intuited seems a lot more human to us, but it still has a lot of shortfalls. Overall, cognitivism has many more weaknesses than strengths, as I shall discuss. It is, first of all, important to define cognitivism and moral realism. The beliefs state that morality is not invented, but discovered through various means (depending on the theory). ...read more.

(3) Overall, Kant's rationalism is a very weak theory (not unlike the bulk of his work, I daresay), and I completely disagree with every single part of it. How this theory is even being discussed in today's society, let alone in the 16th/17th Century leaves me in the dark. It is not even worth considering as a moral theory, and should be dismissed from consideration immediately. The second theory is less specific, referring more to several similarly-aimed theories, rather than just one. These theories are John Stuart Mill's Utilitarianism and Aristotle's Theory of Virtue in particular. Naturalism is a theory that focuses on 'good' as natural properties. This can be a multitude of things. John Stuart Mill said that "the creed which accepts as the foundation of morals, Utility, or the Greatest Happiness Principle, holds that actions are right in proportion as they tend to promote happiness, wrong as they tend to produce the reverse of happiness." (4) This means, in essence, that happiness is the ultimate good. Obviously, happiness is a natural principle, and therefore it makes Utilitarianism a naturalistic theory. Aristotle's virtue theory is somewhat different. It refers to set virtues that must be followed in order to reach the Highest Happiness, which is fulfillment of one's function as a human being. ...read more.

Isn't Moore's suggestion of 'friendship' a thinly veiled attempt at definition of 'good', or at the very least a specific instruction? Not especially 'intuitive.' Also, where do we intuit these morals from? Sorely morality in general cannot be objective (which, granted, is a problem with cognitivism, not specifically intuitionism). Again, this is a weak theory, even though it prevails over the other two. In the end, cognitivism as a whole is not especially useful as a guide as to where morals come from. I stated earlier that cognitivism has many more weaknesses than strengths, and I displayed that through my various condemnations of the theories individually, and also of cognitivism as a whole. Surely morality cannot be objective? Isn't the whole point of morals the fact that they are individual and developed subjectively? Surely there would be no moral disagreement if they in fact were objective, but that is obviously not the case. No, the answer lies in the direct counterpart of cognitivism, non-cognitivism. Morality is for certain subjective, as it is part of our human nature to form opinions based on emotion and preference, not in principles which are apparently entwined in this world we live in. Cognitivism, as a whole, is completely useless in terms of moral analysis and I completely and utterly disagree with all it states. ...read more.