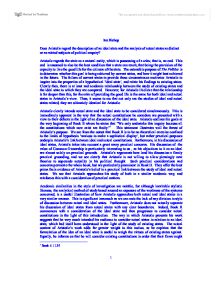 Does Aristotle regard the description of an ideal state and the analysis of actual states as distinct or as related subjects of political enquiry?

Ian Bishop Does Aristotle regard the description of an ideal state and the analysis of actual states as distinct or as related subjects of political enquiry? Aristotle regards the state as a natural entity, which is possessing of a telos, that is, an end. This end is assumed to also be the best condition that a state can reach; that being the provision of the capacity to live the good life for the citizens of the state. The ostensible purpose of The Politics is to determine whether this goal is being achieved by current states, and how it might best achieved in the future. The failure of current states to provide these circumstances motivates Aristotle to inquire into the properties of a hypothetical 'ideal state', and relate his findings to existing states. Clearly then, there is at least and academic relationship between the study of existing states and the ideal state to which they are compared. However, for Aristotle I believe that the relationship is far deeper than this, for the telos of providing the good life is the same for both ideal and actual states in Aristotle's view. Thus, it seems to me that not only are the studies of ideal and actual states related, they are ultimately identical for Aristotle. ...read more.

Aristotle presents his explanation of the existence of the state in terms of what we might call ideals. That is, the state is the culmination of man's natural political instinct to seek a self-sufficient life that will permit the achievement of eudaimonia. It is in these terms that Aristotle understands the state, for the achievement of the good life is the telos of the state, and to understand a thing Aristotle require that you know the end of that thing. Since the end of the state is the achievement of the good life for its citizens, an understanding of this goal is an understanding of the state. Thus, it is not possible for Aristotle to regard an ideal state (that is, one that has reached its telos) separately from an existing state, since they share the same basic definition. Admittedly there is some difficulty in using the order of The Politics to confirm that Aristotle intended to consider ideal and actual states in succession, as the original order of the books (or of the source material that we have labelled as books) is unknown. However, the similarity in argumentative style cannot be dismissed so easily. Even when speaking about ideals, Aristotle never allows himself to be blinded to practical considerations. Indeed, as we have seen with the matter of common ownership, Aristotle dismisses a principle, however desirable in theory, if it will not be practicable. ...read more.

Such divisions are merely for the purposes of clear argument, and Aristotle does not intend to divide the two into separate academic spheres. Rather, both are intrinsically related as topics of political enquiry for Aristotle seeks to understand what constitutes an ideal state and how it might be brought about based upon knowledge of existing states. Thus, it is not only difficult separate Aristotle's views on ideal and actual states, but also fruitless and meaningless. Aristotle intends his writings on both to be considered in the light of the other. He grounds his study of the ideal state in practical considerations derived from knowledge of actual states, and he examines existing states with a view to the creation of an ideal state. In conclusion, Aristotle's political enquiry is by its very nature a study of the relationship between actual states and the concept of an ideal state. He separates them only in the manner of point and counter-point. Aristotle does not seek to place a clear divide between what constitutes an ideal state and what forms an actual state. Since he views the state as a natural body, he believes that it shall achieve an ideal form in actuality at some point. Thus, for Aristotle, it is anathema to separate the study of the ideal state from the consideration of actual states. 1750 1 Book ii 1 l.35 ?? ?? ?? ?? 1 1 ...read more.