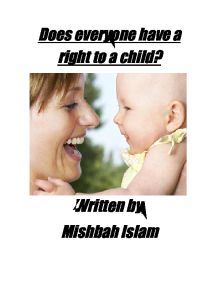 Does everyone have a right to a child?

Does everyone have a right to a child? Written by, Mishbah Islam What are the different alternatives to conceiving naturally? Artificial insemination Artificial insemination is often used by couples that are infertile due to sperm disorders such as low sperm count etc. Usually the process involves injecting sperm through a narrow catheter into the woman's reproductive tract or for most couples AI is performed with the man's sperm. For: it is a harmless procedure. Against: It goes against religious values because masturbation may be required in the process also it has a low success rate. IVF Couples who usually have unexplained fertility problems or female factor such as blocked fallopian tubes or endometriosis. Step 1: the woman takes fertility drugs to stimulate the production of eggs Step 2: once they are mature they are collected by ultrasound guidance. Step 3: the man produces a sperm sample, which is prepared before being put with the eggs in a Petri dish left for a few days to see if it has fertilised. Step 4: a healthy embryo is placed in the womb Step 5: remaining embryos are suitable for freezing may be stored for future use. For: This treatment option gives women with blocked, damaged or missing fallopian tubes a chance to have a baby. Against: fertility drugs used to stimulate egg production themselves can have severe side effects, risk of multiple pregnancies and increased risk of miscarriage and other complications. ...read more.

Surrogacy A surrogacy arrangement is one in which one woman (the surrogate mother) agrees to bear a child for a couple (the intended parents) and surrender it at birth. This provides an opportunity for those who are unable to carry a child themselves to overcome their infertility. For a woman who can't conceive, surrogacy creates a chance for her and her partner to parent a child who is their genetic offspring at least partially (if they use the father's sperm and the surrogate's egg) or completely (if they ask the surrogate to carry an embryo created from the mother's egg and the father's sperm). If they set up an open arrangement, the couple can be intimately involved in all the details of their baby's gestation and may be there for the birth of their baby. Against: In addition to the complications accompanying procedures, such as IUI and IVF, surrogacy is highly controversial and can be legally complex. Some surrogates face difficult emotional and psychological issues over letting the baby go. The infertile couple not only experience the usual suspense and anxiety of waiting for a pregnancy to reach full-term safely but also worry about legal complications, the ethics of "buying" a child and the possibility that the surrogate will change her mind. Roman Catholics do not allow any form of fertility treatments where spare embryo's are created Catholics believe they are not a disposable commodities. ...read more.

Scenario 3 A couple have embryos left over from their IVF treatment and they are not too sure what to do. The doctor suggests that they should be used for other patients so their embryos remain frozen in perpetuity. I believe they should be donated instead of destroyed because they can help other people who were in their position. Scenario 4 Lorraine Hadley had two frozen embryos with her husband when she found out she was diagnosed with cancer and the treatment could leave her infertile, however when she split up with her husband he wished the embryo's to be destroyed and the court has said the same thing. I believe because this the only way for Lorraine to have a child she should still be able to keep the embryos and subsequently have the child because every mother has the right to keep their child whether it is born or still an embryo. Scenario 5 Liz Buttle told doctors a lie and had IVF at the age of 61 claiming she was 49; she now has a child named Joe. I believe that this is totally immoral because she told a lie and got a child which she may not be able to physically look after also the child may feel uncomfortable having a mother who is old enough to be his grandmother and a sister who is old enough to be his mother. ...read more.