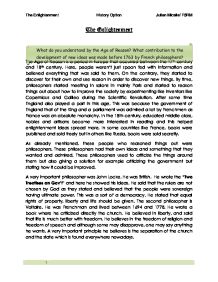 Enlightenment Philosophers. These philosophers used to criticize the things around them but also giving a solution for example criticizing the government but stating how it could be improved.

The Enlightenment The Age of Reason is a period in Europe that occurred between the 17th century and 18th century. Here, people weren't just spoon fed with information and believed everything that was said to them. On the contrary, they started to discover for their own and use reason in order to discover new things. By time, philosophers started meeting in salons in mainly Paris and started to reason things out about how to improve the society by experimenting like inventors like Copernicus and Galileo during the Scientific Revolution. After some time England also played a part in this age. This was because the government of England that of the King and a parliament was admired a lot by Frenchmen as France was an absolute monarchy. ...read more.

He said that the rulers are not chosen by God as they stated and believed that the people were sovereign having ultimate power. This was a sort of a democracy. He stated that equal rights of property, liberty and life should be given. The second philosopher is Voltaire. He was Frenchman and lived between 1694 and 1778. He wrote a book where he criticized directly the church. He believed in liberty, and said that life is much better with freedom. He believes in the freedom of religion and freedom of speech and although some may disapprove, one may say anything he wants. A very important principle he believes is the separation of the church and the state which is found everywhere nowadays. ...read more.