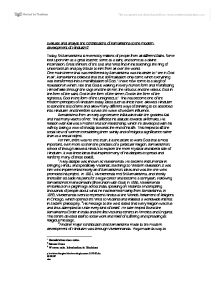 Evaluate and analyse the contributions of Ramakrishna to the modern development of Hinduism?

Evaluate and analyse the contributions of Ramakrishna to the modern development of Hinduism? Today, Sri Ramakrishna is revered by millions of people from all different faiths. Some look upon him as a great teacher, some as a saint, and some as a divine incarnation. Great thinkers of the East and West find in his teachings the ring of universal truth and pay tribute to him from all over the world. One main theme that was reinforced by Ramakrishna was his desire to "see in God in all". Ramakrishna believed that true self-realisation only came when everything was transformed into a manifestation of God. "I have now come to a stage of realization in which I see that God is walking in every human form and manifesting Himself alike through the sage and the sinner, the virtuous and the vicious. God in the form of the saint, God in the form of the sinner, God in the form of the righteous, God in the form of the unrighteous." This has become one of the modern principles of Hinduism today. Ideas such as these have allowed Hinduism to stand the test of time and allow many different ways of thinking to be absorbed into Hinduism and therefore survive the wave of western influence. ...read more.

This centre devoted itself to social work and relief of suffering and spreading its religious message. 3Another major contribution that Ramakrishna made to the modern development of Hinduism was through Vivekennanda. Yoga made its way to America officially in the 1890's when Swami Vivekenanda addressed the World Parliament of Religions in Chicago. It was here, that the west became aware of yoga whether as a meditative or a physical concept. Overall much of what Ramakrishna said was not new. His ideas were already present in the religious scriptures such as the Upanishads and Vedas. However, it was his intense spirituality that had a deep impact on everyone he came into contact with, often producing some form of spiritual experience for them. This enhanced development of Hinduism by putting an emphasis onto the mystical link and unity between all religions,. Ramakrishna made a contribution to Hinduism by offering his idea to the Indian and Western community at a time of much needed reform and modernisation for Hindu teachings to survive. Discuss to what extent if any his contribution enhances development of Hinduism? Today there are Vedanta centres throughout the world, and the Ramakrishna Order is the largest spiritual organization in India. ...read more.

To a large extent there are areas of Hinduism that Ramakrishna contributed more significantly too than others. 5For example, without the inspiration or influence from him, Vivekendanda would not have been able to put Hinduism and its main principles at the forefront with other leading religions. Thus ideas such as Yoga and the need for liberation would not have been introduced into the western world without Vivekennda. This has allowed Hinduism to develop further and evolve over time to suit many different followers and their own beliefs. In conclusion I feel that Ramakrishna to a large extent has made little contribution towards enhancing the development of Hinduism, mainly as most of his ideas have failed to reform Hindu thinking. Furthermore, from a Brahmin perspective I believe that his ideas undermine the superiority of Hindu teachings. Although he stated that Hinduism was the mother of all religions, he did not actively promote Hindusim or enhance its own development. More significantly Ramakrishna himself did not affect Hinduism but instead it was his disciple Vivekenanda who put forward theory unanimity. 1 Ramakrishna class notes. 2 Steven Cross 3 W owen cole. Introduction to Hinduism 4 History of World Religions Danziel 5 Klaus K Klostermier n:\mywork\rs\hinduism\ramak contribution.doc 02/05/07 97aftab ...read more.