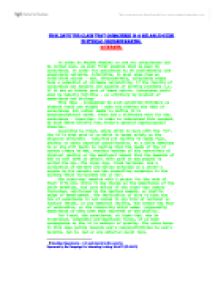 Evaluate the claim that conscience is a reliable guide to ethical decision making.

EVALUATE THE CLAIM THAT CONSCIENCE IS A RELABLE GIUDE IN ETHICAL DECISION MAKING. 45 MARKS. In order to decide whether or not our consciences can be relied upon, we must first examine what we mean by conscience. In order for conscience to be consistently and absolutely reliable, infallible, it must stem from an infallible source - God. Alternatively, conscience might have a potential of ultimate reliability, if the faculty of conscience was dynamic and capable of solving problems i.e. if it was an innate part of human nature. Conscience could even be totally fallible - an arbitrary by-product of experience and biology. This idea - propagated by such scientist-thinkers as Sigmund Freud and Piaget - does not dismiss the idea of conscience, but rather seeks to define it in psychoanalytical terms. Freud had a different word for the conscience - Super-Ego. In order to understand this concept, we must delve briefly into Freud's general psychological theories. According to Freud, every child is born with the 'Id'. The Id is that part of us which is based solely on the pleasure principle - ignoring all reality it seeks food, shelter or other physical gratification. As a child develops he or she will begin to realise that the needs of the Id cannot always be met, whether because of the restraints of physical reality or the emotional impact that the demands of the Id will have on others. ...read more.

He referred, in his first sermon, to the unique ability of conscience to evaluate and assess our motives without having motive in itself. However, he also saw conscience as an emotional imperative - it could inform us through our feelings of the value of our actions. Butler's great success was uniting the emotional and rational agents of conscience. Piaget very much believed in a teleological nature of the human body i.e. every part of the self has a purpose and, in the case of the mind, these purposes could be broadly categorised into private and public affections. Neither kind was wholly good, but, in a natural law sense, each was good in as much as it performed its function. For example, the private affection of hunger was good in that it promoted the good of the self through sustaining nutrition, but was obviously not intrinsically good. The private functions are all things which relate directly to the welfare of the self. The public functions - emotions like benevolence, 'indignation at successful vice', 'love of society' seem to relate more directly to the matter of conscience. They are the emotive arm of the conscience in that they provide an emotional imperative to fulfil the good 'functions' of each. ...read more.