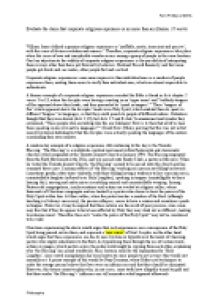 ask ourselves ?why would God want us to act like animals if he intended us to rule over and care for the animal kingdom?? After all, acting like animals doesn?t glorify God; rather it might be argued that it dishonours him and humiliates his creation. Whether religious experiences are personal experiences like visions or voices or are corporate in nature, one main criticism is that they rely on personal testimony, not empirical evidence. The issue here is the multitude of problems that surround taking personal testimony at face value. For example, I personally might want to believe someone who says that they saw a vision of Christ, but even if the person himself is not lying and entirely believes that they saw Christ, does this mean that they actually did see him and the vision was not caused by lack of sleep, drugs, or a psychotic episode. Schizophrenia is a mental condition in which it is common to feel that God is speaking to you, or that you have been chosen by God in some way. All of these factors diminish the validity of personal testimonies. ...read more.

In conclusion therefore, I can see why some believe corporate religious experiences to be true since some people having these remember them and it is more convincing when more than one person has the same experiences. Also speaking in ?tongues? is mentioned in the Bible and some positive results may ensue from these experiences. However, in my opinion modern day examples of corporate and individual religious experiences are merely an illusion and can mostly be explained by science and psychology. For example, the Toronto Blessing could merely be a result of hypnotism, and as for the golden teeth, it hasn?t been proved that the people concerned didn?t already have gold teeth. Also, behaving like animals is not mentioned in the Bible as a sign of the Holy Spirit working, convincing me that this has nothing to do with God. In fact, a lot of hypnotists can cause people to behave like animals under hypnosis, so might this not be the case here? As for healing rallies, this can be explained by crowd manipulation, peer pressure and mass hysteria. However, I do believe that the religious experience that occurred on Pentecost 33 AD was genuine because it had a divine purpose, to continue the preaching work started by Jesus Christ. Philosophy ...read more.