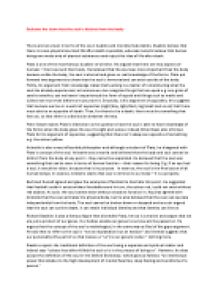 Evaluate the claim that the soul is distinct from the body:

Transfer-Encoding: chunked ﻿Evaluate the claim that the soul is distinct from the body: There are two views in terms of the soul: dualists and monists/materialists. Dualists believe that there is a non-physical soul and life after death is possible, whereas monists believe that human beings are made only of physical substances and reject this idea of life after death. Plato is one of the most famous dualists? of all time. He argued that there are two aspects of humans ? their soul and their body. He believed that the soul was more important than the body because unlike the body, the soul is eternal and gives us real knowledge of the forms. Plato put forward two arguments to show that the soul is immortal and can exist outside of the body. Firstly, his argument from knowledge states that learning is a matter of remembering what the soul has already experienced, as humans we can recognise things that are equal e.g. one grain of sand to another, yet we haven?t experienced the form of equals and things such as maths and science are true even before we can prove it. ...read more.

It makes rational sense that we would come up with a way that ensured we could see/contact our loved ones again in order to bring about comfort. Descartes was a Cartesian Dualist and rationalist ? he believed that true knowledge can only be gained through the use of reason and rational thought. Descartes was born in a time of great scepticism, where everybody doubted everything, to the extent that Descartes started to doubt the existence of his own body. One thing he couldn?t doubt though, was his ability to think, he couldn?t doubt that he existed because that required him to think for himself, therefore he concluded that we must be more than merely a physical shell. This is where his famous quote: ?cognito ergo sum? (I think therefore I am) derives from. He concluded that the mind must exist and must be distinct from the material and bodily substance. The mind is the place in which all feelings, sensations and thoughts are known only to the person experiencing them. The body however, performs all physical activities which are observable to all. Descartes dedicated much of his time to the study of the pineal gland to which he named: the seat of the soul. ...read more.

His theory was therefore labelled as heresy and disregarded. Hick?s theory has many flaws, lack of evidence being one of them, another being that individuals with Alzheimer?s, according to Hick?s thoughts, have no soul ? so how could they be replicated? There is a lot of evidence that suggests the soul is distinct from the body in the sense that we all have our own personal identity, identical twins are physically exactly the same but at the same time two different people. There is something non-physical that makes one distinct from the other. However, this does not mean that the soul and the body are two separate entities. I do not wish to deny that the soul exists, rather I deny that the two are separate entities. Plato and Descartes are in the minority and there is by far more evidence that supports the monist/materialistic belief that the body is enhanced by the soul, in the same sense that the colour red is enhanced by red objects ? one cannot survive without the other. Therefore I conclude that the soul is not distinct from the body ? the soul cannot survive without the body, but the body can survive without the soul e.g. psychopaths and individuals with Alzheimer?s. ...read more.