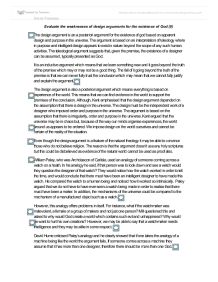 Evaluate the weaknesses of design arguments for the existence of God

Evaluate the weaknesses of design arguments for the existence of God (9) The design argument is an a posteriori argument for the existence of god based on apparent design and purpose in the universe. The argument is based on an interpretation of teleology where in purpose and intelligent design appears to exist in nature beyond the scope of any such human activities. The teleological argument suggests that, given the premise, the existence of a designer can be assumed, typically presented as God. It is an inductive argument which means that we learn something new and it goes beyond the truth of the premise which may or may not be a good thing. The fall of it going beyond the truth of the premise is that we can never fully trust the conclusion which may mean that we cannot fully justify and explain the argument. ...read more.

Even though the design argument is a feature of the natural theology it may be able to convince those who do not believe religion. The reason is that the argument doesn't use any holy scriptures but this could be disbelieved as evidence of the natural world cannot be used as proof also. William Paley, who was Archdeacon of Carlisle, used an analogy of someone coming across a watch on a heath. In his analogy he said, if that person was to look down and see a watch would they question the designer of that watch? They would notice how the watch worked in order to tell the time, and would conclude that there must have been an intelligent designer to have made this watch. ...read more.

If someone comes across a machine they assume that it has more than one designer, therefore there should be more than one God. Charles Darwin is the proponent of the theory of Natural Selection. Darwinism thus postulates that the fittest and healthiest members of society survive and their characteristics are passed down giving the appearance of design in the universe Richard Dawkins, a biological materialist and reductionists, supported Darwin by arguing that random mutations in DNA alone give rise to variation in the world and the illusion of design. For Dawkins, life amounts to nothing more than bytes of digital information contained in the quaternary code, DNA. Darwinism presents a challenge to arguments from design, because it suggests an alternative reason why creatures seem to be so well suited for their purposes. When evaluating the weaknesses of design arguments for the existence of god, ?? ?? ?? ?? Kerrie Freeman ...read more.

The essay makes a number of good points and makes a number of decent attempts to evaluate throughout. This is the key to getting marks for this sort of essay, which explicitly asks for evaluation. The response is rather brief though. More arguments could be discussed, both to display knowledge and to give the students something more to talk about in their evaluation. The essay would be improved by making a clear attempt to weigh up the pros and cons of the arguments discussed and to attempt an overall conclusion. This is suggested by the essay question. As the question specifically asks one to evaluate the weaknesses of the design argument, the introductory material and explanations are irrelevant, further limiting the useful content of the essay. Focus on this would be required to get a top mark in the essay. It would also be ideal to offer an original argument as to whether the weaknesses are fatal overall or not to the argument.