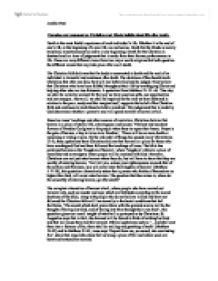 Examine and comment on Christian and Hindu beliefs about life after death. Death is the most fateful experience of each individual's life. Whether it is the end of one's life, or the beginning of a new life, no one knows. Death for the Hindu is merely transition, simultaneously an end to a new beginning. Death for the Christian is destined and is a time of judgement that is made from their former performances in life. These are very different views from two major world religions that both question the different events that may take place after one's death. The Christian faith believes that the body is resurrected at death and the soul of an individual is immortal and continues after death. The doctrines of the church teach Christians that after one dies, they will rise before God and be judged. They believe that Christians who have been faithful throughout their life by worshipping Christ and helping other who are less fortunate. A quotation from Matthew 25: 31-46, 'One day we shall be called to account for the way we have used our gifts, our opportunities and our energies. Above all, we shall be required for the way we have behaved in relation to the poor, needy and the marginalised', supports the belief of the Christian faith and continues to teach these beliefs to mankind. ...read more.

Although this is the view for many Christians, others including Skeptics, Humanists, Atheists, Agnostics generally believe that there is no afterlife and accept that after death, there is personal annihilation. Roman Catholic Christians also have alternative but similar views as they believe that in between heaven and hell, there is 'purgatory'. This is where people who have sinned within their lifetime, but have not sinned to the extent that they must enter hell and be tortured for eternity, are punished for their bad deeds until all penalties have been paid. This enables them to be cleansed from sin and can potentially enter heaven where their soul will rest for eternity. Roman Catholics also believe that people who have family and friends to pray for them after they die will be released from purgatory sooner than those who don't. This is why many Roman Catholics have an overwhelming fear of death as they feel they will certainly suffer, whether it is in hell or purgatory. Pope John Paul issued a piece entitled Incarnationis Mysterium which suggests that Roman Catholics visit certain holy sites to try and reduce the amount of time they will have to spend suffering after death. ...read more.

By carrying out these, and using them as a guideline, moksha can be gained. Hindus see their religion as a way of life and many Hindus apply themselves and live their lives wanting to act to the best of their potential in hope that when they die, they will be released from samsara and gain moksha. Christianity and Hinduism are two major religions that are followed worldwide. They also have very contradistinctive views on life after death. However, both Christians and Hindus turn to their religion to find answers for existence along with death. They also hold tenaciously to the beliefs taught by their particular denominations as a way of comfort. One thing that Christians and Hindus have in common is that they both portray religion as a way of life and use scholarly teachings to influence them on which rightful path to follow in life. Death has been questioned for a very long time and no one has been able to answer the question 'What happens after death?', which means no one really knows what events will take place after we die, where we will go or what will happen to us. Although we try and answer all of these questions with religious beliefs, until one experiences death, the question that has caused distress to people for over 2 millennia still remains, is there an afterlife? ?? ?? ?? ?? Janisha Patel ...read more.