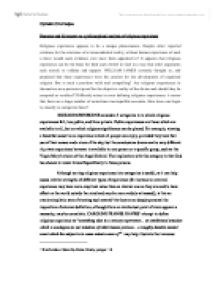 Examine and Comment on a philosophical analysis of religious experience

Examine and Comment on a philosophical analysis of religious experience Religious experience appears to be a unique phenomenon. Despite other reported evidence for the existence of a transcendental reality, without human experience of such a force would such evidence ever have been appealed to? It appears that religious experience can be the basis for faith and a belief in God in a way that other arguments seek merely to validate and support. WILLIAM JAMES certainly thought so, and proposed that these experiences were the catalyst for the development of organised religion. But is such a position valid and compelling? Are religious experiences in themselves an a posteriori proof for the objective reality of the divine and should they be accepted as veridical? Difficulty arises in even defining religious experiences; it seems that there are a huge number of sometimes incompatible accounts. How does one begin to classify or categorise these? RICHARD SWINBURNE considers 5 categories in to which religious experiences fall; two public, and three private. Public experiences are those which are available to all, but on which religious significance can be placed. For example, viewing a beautiful sunset is an experience which all people can enjoy, provided they have full use of their senses and a view of the sky, but the conclusions drawn can be very different. A private experience however is available to one person or a specific group, such as the Virgin Mary's vision of the Angel Gabriel. The implication with this category is that God has chosen to reveal himself specifically to these persons. Although sorting religious experience into categories is useful, as it can help assess relative strengths of different types of experience (for instance an external experience may have more empirical value than an internal one as they are said to have effect on the world outside the mind and may be more widely witnessed), is this an overly simplistic way of viewing such events? ...read more.

In terms of a philosophical analysis this criticism does somewhat undermine the reliability of these experiences, and the fact that the definitions are so ambiguous does undermine the ability to effectively analyse the implications of such an experience. This difficulty in using language to describe and define religious experience is well illustrated by mysticism. During a mystical experience, one feels a complete 'oneness' with the external world (as opposed to the distance that RUDOLPH OTTO felt) and all physical barriers break down. St Teresa, one of the most renowned mystics within the Christian faith described her experiences as the "prayer of quiet" and the "prayer of union." During such prayers she frequently went into a trance, and at times entered upon mystical flights in which she would feel as if her soul were lifted out of her body. She said ecstasy was like a "detachable death" and her soul became awake to God as never before as the faculties and senses are dead. According to WILLIAM JAMES there are four distinguishing features of mystical experiences. The first is "ineffability"7; they cannot be described using language. In the same way that it would be impossible to describe the colour orange to someone who had only ever seen black and white, it is impossible for a mystic experient to meaningfully describe their experience to others. The second is a "noetic quality"8. This relates the way mystical states seem to convey a newfound knowledge of life and the true nature of reality. JAMES also postulates that in general "transiency"9 is common to religious experience, in that they are usually brief, not longer than half an hour. Mystical experiences are usually "passive"10. The mystic feels that (s)he is in the grip of some other power, and cannot control when or how the experience will come, other than putting themselves in the right conditions for being receptive to one. ...read more.