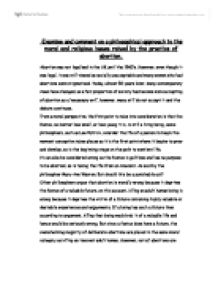 Examine and comment on a philosophical approach to the moral and religious issues raised by the practice of abortion.

Examine and comment on a philosophical approach to the moral and religious issues raised by the practice of abortion. Abortion was not legalised in the UK until the 1960's. However, even though it was legal, it was still viewed as socially unacceptable and many women who had abortions were stigmatised. Today, almost 50 years later, many contemporary views have changed, as a fair proportion of society has become more accepting of abortion as a 'necessary evil', however, many still do not accept it and the debate continues. From a moral perspective, the first point to take into consideration is that the foetus, no matter how small, or how young it is, is still a living being, some philosophers, such as Lee Patrick, consider the life of a person to begin the moment conception takes places as it is the first point where it begins to grow and develop, so is the beginning stage on the path to sentient life. It can also be considered wrong as the foetus is guiltless and has no purpose to be aborted, so is taking the life from an innocent. As said by the philosopher Mary Ann Warren. But should this be a punishable act? Other philosophers argue that abortion is morally wrong because it deprives the foetus of a valuable future, on this account, killing an adult human being is wrong because it deprives the victim of a future containing highly valuable or desirable experiences and enjoyments. ...read more.

Therefore, Methodists also do not agree wholly with abortion, however, they do agree with it in certain circumstances (such as, if the pregnancy will affect the life of the mother, if the child will be born handicapped or under social conditions, such as if the birth would severely reduce the living conditions of existing children), most of which are similar to those considered acceptable by the Church of England. Other Churches such as the Anglican Church and the Religious Society of Friends, believe that although abortion should not be encouraged, they feel that under certain circumstances it can be justified. Such as if the pregnancy would threaten the life of the mother, where the mother has been raped, where the foetus is at risk of being seriously handicapped. Overall from a religious point of view, abortion is only considered right under very severe circumstances, or not considered at all. In conclusion, there are very few differences in view on abortion, from a moral and religious perspective, and both points of view consider abortion as an unacceptable action, unless the reason for doing it produces the least pain or is the best moral outcome. However, the religious view of abortion is much more strict than that from a moral perspective as the moral view tend to sympathise with the mother a lot more, whereas the religious outlook is that abortion is still murder, which is going against God, so must be not be taken lightly. ...read more.