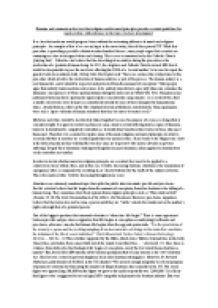 Examine and comment on the view that religious and/or moral principles provide essential guidelines for medical ethics with reference to abortions.

﻿Examine and comment on the view that religious and/or moral principles provide essential guidelines for medical ethics with reference to the topic you have investigated It is clear that medicine would progress faster without the restraining influence of moral and religious principles. An example of this is be a recent topic in the news today, that of three parent IVF. While this procedure is providing a possible solution to mitochondrial disease, some people argue that scientists are venturing too close to designer babies and cloning. This is seen as unnatural or by the Catholic Church ?playing God?. Catholics also believe that the discarding of an embryo during the procedure is the eradication of a (potential) human being. In 2015, the Anglican and Catholic Church warned MPs that it would be irresponsible to pass the new laws allowing the DNA of a ?second mother? to be used to repair the genetic faults in an unborn child. Bishop John Sherrington said ?There are serious ethical objections to this procedure which involves the destruction of human embryos as part of the process. The human embryo is a new human life, and it should be respected and protected from the moment of conception.? Most people agree that nobody wants medicine and science to be entirely unrestricted, especially when one examines the inhumane consequences of Nazi experimentation during the holocaust in World War Two. Nazi physicians performed brutal medical experiments upon helpless concentration camp inmates. As a result of this, their scientific discoveries were deemed as scientifically invalid because of their disregard for humanitarian ethics. ...read more.

Although medically there is no justification for this reasoning, this idea informed the modern abortion laws. Therefore, using Aquinas?s concept comes a point when aborting a foetus is not ethically sound. There is no biological evidence that ensoulment takes place at different times for different genders. In the modern Roman Catholic Church, ensoulment occurs at the moment of conception. The embryo is not a person, but has the potential to become one. In 1987 Pope John Paul II said the observation of the physical state of the embryo was not sufficient enough to establish whether it is or isn?t a person. ?No experiment can be in itself sufficient to bring us to the recognition of a spiritual soul.? This belief assumes that potential life, even in the earliest stages of gestation, enjoys the same value as any existing life. Only shortly after conception, a unique DNA code is formed which remains unchanged throughout the entire life of the foetus. The presence of a unique human DNA code is scientific evidence that this early stage is the start of a human life. Methods that might determine foetal viability did not have the precision that the law usually requires until the twentieth century, such as birth, missed period and the quickening. They are unreliable as the biological indicators are different. Some thinkers place emphasis on the movement of the ?quickening? ? when the mother first feels the foetus move in her womb. But modern ultrasound techniques have proven that this is inconsistent because the foetus has been moving before that time but was not large enough for its movement to be registered by the mother. ...read more.

The doctrine of double effect supports this as it permits the killing of an innocent life if it is not the primary intention and is not disproportionate to the good ends. But if the same situation presented itself and you were to take the sanctity of life approach, you would have to choose between strong or weak principle. Vitalism takes the view that nothing justifies the termination of human life because we are made in the image of God. ?God is the author or life. He starts it and he should end it.? (John 1:21) However, weak sanctity of life argues that agape should be the primary determining principle. It is argued that Vitalism makes life too absolute, so it becomes an idol of worship. Stanley Hauerwas argued that the Church permits the taking of life when the well being of others is at risk. ?Appeals to the sanctity of life as an ideology make it appear that Christians are committed to the proposition that there is nothing in life worth dying for.? If two lives are equally sacred and you have to choose between the two, you have to question what type of value each life has. In utilitarianism the quality of life is judged by the hedonic calculus, preference, ideal and welfare. However, the principle of utility dehumanises others, and Kant instantly dismisses it because it fails to treat people as an end in themselves. Utilitarianism also fails to mention what is meant by a valuable life; pleasure is too subjective as there are different types. Bernard Williams said that utilitarianism could erode personal integrity. If the two lives were equally sacred, sanctity of life would not let you choose either one. ...read more.