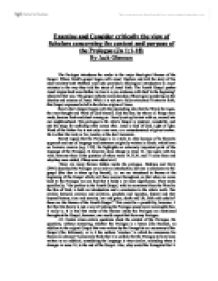 Examine and Consider critically the view of Scholars concerning the content and purpose of the Prologue (Jn 1:1-18) By Jack Glennon The Prologue introduces the reader to the major theological themes of the Gospel. Where Mark's gospel began with Jesus' Baptism and told the story of his adult ministry both Matthew and Luke provided a theological introduction to Jesus' ministry in the way they told the story of Jesus' birth. The Fourth Gospel pushes Jesus' origins back even further in time to a pre-existence with God 'in the beginning' whenever that was. This gospel reflects many decades of theological pondering on the identity and mission of Jesus. While it is not yet a fully articulated Trinitarian faith, this Gospel expresses belief in the divine origins of Jesus. Saint John's Gospel begins with the astonishing idea that the Word, the logos, the very thought and Word of God himself, God the Son, by whom all things were made, became flesh and dwelt among us - literally set up his tent with us, moved into our neighbourhood. This prologue to St. John's Gospel is mystical, wonderful, and sets the stage for unfolding what comes after. Jesus is God of God, Light of light, Word of the Father--he is not only a nice man, or a misunderstood religious teacher. ...read more.

In the Stoic view, this meant life was to be lived in accordance with the word of God. This may be true, as Jesus was put on Earth to spread the word of God, and for people to follow that word. Philo's logos is very similar to the Jewish idea of wisdom, but he would not have said the word became flesh, so he cannot be considered as a possible and understandable viewpoint. The Jews believed that Logos means the word of the Lord, commits things into being- Gen 1:3, active- Gen 2:8, and an inspiration of the prophets e.g. Hos 1:1. To me this seems the more likely view, as it is more in depth and accurate. The Stoic ideal comes close to my view, but the Jewish explanation seems to be more accurate and understandable. This goes on throughout the whole Gospel, not just the Prologue, although the 'Word' is only mentioned inside the Prologue. The introduction to the Fourth Gospel, known as the Prologue (1: 1-18), is regarded by many as the greatest piece of theological writing in Christian literature. It doesn't just appeal to Jews, but it also contains elements of both Greek and Stoic philosophy which would make the Gospel story meaningful not only to Jews and Christians, but also to the Hellenistic thinkers and the educated minds of the Greek and Roman worlds. ...read more.