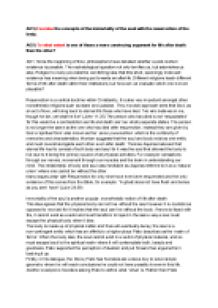 Examine the concepts of immortality of the soul with resurrection of the body - to what extent is one of these a more convincing argument for life after death than the other?

Transfer-Encoding: chunked ﻿AO1) Examine the concepts of the immortality of the soul with the resurrection of the body. AO2) To what extent is one of these a more convincing argument for life after death than the other? AO1: Since the beginning of time, philosophers have debated whether a post-mortem existence is possible. The eschatological question not only terrifies us, but astonishes us also. Religion to many provides the comforting idea that this short, seemingly irrelevant existence has meaning when being put towards an afterlife. Different religions teach different forms of life after death within their institutions, but how can we evaluate which one is more plausible? Resurrection is a central doctrine within Christianity, it is also very important amongst other monotheistic religions such as Islam and Judaism. This monistic approach sees that God, as an act of love, will bring back to eternal life those who have died. ?He who believes in me, though he die, yet shall he live?.(John 11:25) The person who has died is not ?resuscitated? for this would be a contradiction as life and death are two wholly separate states. The person is no longer the same as the one who has died after resurrection, instead they are given by God a ?spiritual form? also known as the ?soma pneumatikon? which is the continuity of memories and characteristics. ...read more.

Things that change must eventually decay, it is the soul which stays the same. It would therefore be impossible to assume that soul is made from body and body is made from soul. Cogito Ergo Sum or ?I think, therefore I am? is a quote from French philosopher Rene Descartes who is sceptical of the physical world and suggests that to doubt the physical existence of a person is proof of the reality of one?s mind. It would imply that one is not robotic but can think for oneself and proposes that we are free willed. Descartes argues that the soul is the most meaningful way of understanding the afterlife. This notion of life after death would support the perception of the soul being the most meaningful and important reality for it focuses entirely on the soul as opposed to the physical body. Immanuel Kant believed that the purpose of human existence was to achieve complete good or ?summum bonum?. Life is far too short to reach this and so God is morally obligated to grant us eternity. Morality would otherwise be pointless. Immortality of the soul grants the idea of multiple life times in which we can gain this potential. ...read more.

If there are no challenges to overcome, what is the point in existing in an afterlife? How can one be sure that it is truly worthwhile? H.H Price also points out that if we do not have a physical body, how can we interact with other souls? Perhaps we continue to exist but not consciously. There are two men walking down a road, one believes that the road will take them to a city, the other believes there to be nothing. If they do not walk, it cannot be proven right or wrong, they have to reach the end of the road to know the truth and so to argue is meaningless. In conclusion, both the idea of judgement day and death itself cannot be verified until the end of life is reached, and so religion is meaningless. Neither form of life after death provides empirical evidence to support the notion. Immortality of the soul does however seem more plausible than the idea of a body coming back to life as we often hear of people recalling past lives. The only evidence of Resurrection is found in the Bible which is outdated and focuses on the resurrection of Jesus. Immortality of the soul is therefore a more convincing argument for life after death than Resurrection of the body. ...read more.