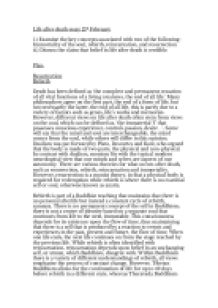 Examine the key concepts associated with two of the following: Immortality of the soul, rebirth, reincarnation, and resurrection ii.) Discuss the claim that belief in life after death is credible.

Transfer-Encoding: chunked ﻿Life after death essay 21st February 1.) Examine the key concepts associated with two of the following: Immortality of the soul, rebirth, reincarnation, and resurrection ii.) Discuss the claim that belief in life after death is credible. Plan: Resurrection Rebirth Death has been defined as ?the complete and permanent cessation of all vital functions of a living creatures, the end of all life.? Many philosophers agree on the first part, the end of a form of life, but not necessarily the latter, the end of all life, this is partly due to a variety of factors such as genes, life?s works and memories. However, different views on life after death often stem from views on the soul, which can be defined as, ?the immaterial ?I? that possesses conscious experience, controls passion, desire??. Some will say that the mind and soul are interchangeable; the mind comes from the soul, while others will differ in this opinion. Dualism was put forward by Plato, Descartes and Kant, who argued that the body is made of two parts; the physical and non-physical. In contrast with dualism, monism fits with the typical modern neurological view that our minds and selves are aspects of our autonomy. There are various theories for what occurs after death, such as resurrection, rebirth, reincarnation and immortality. However, resurrection is a monist theory, in that a physical body is required for redemption while rebirth is where there is no essential self or soul, otherwise known as anatta. ...read more.

?God shows Ezekiel a valley of dry bones and states that he is able to ?make these live again?. The reviving of the dry bones signified God?s plan for Israel?s future national restoration, showing that Israel?s new life depended on God?s power and not the circumstances of the people. Putting ?breath? by God?s Spirit into the bones showed that God not only wanted to restore them physically but spiritually. Although, many interpret this passage in different ways and some maintain that this passage was only a metaphor. Within Christianity, whether resurrection involves a bodily life after death is debated. In general terms, Catholicism has traditionally believed in the resurrection of the person?s body and soul. The Church teaches that when a person dies, their body starts its process of decomposition. Meanwhile, the soul leaves the body and is immediately evaluated in a Particular judgment. There are three possible destinations immediately after the judgment, heaven, hell and purgatory. Later, when Jesus returns to earth he will conduct the final judgment. Saint Paul argued in favour of resurrection of two grounds. Firstly, since Jesus was resurrected, so too should Christians hope to be resurrected. Secondly, since God has created many types of bodies in nature, we should believe that he is able to make human bodies perfect (1 Corinthians 15). If we accept that God is creator, then resurrection seems a coherent idea. ...read more.

A Church persecutor, Saul of Tarsus, unexpectedly transformed into a believer after the resurrection. Verification is only possible in the weak sense of eschatological verification suggested by John Hick in his Celestial City analogy. John Hick is a materialist, who believes that the soul and the body are ?psycho- physically? unified. Hick explains in his Replica Theory, where he discusses how God makes it possible for people to be ?replicated? on a parallel universe. Hick talks about how the instantaneousness replication would be different from simply being transported from London to New York, he says all the individuals would know their dead and would be on a world populated by deceased individuals. His theory could be seen as incoherent because there is no evidence in science to suggest there is a parallel universe, however if you accept God?s omnipotent existence, this theory is plausible and does not depend on dualism. But, even Hick recognised the limits of his own theory and the fact that it is hypothetical in the extreme. It should be noted that this is an extending theory into the unknown and is purely hypothetical. To conclude, life after death is credible because believers avoid the limitations of rationality and focus on faith, rather than empirical evidence. While some philosophers like Bertrand Russell, argue that the hope of a better life in heaven relieves humans of responsibility for what happens on Earth and encourages a fatalist mentality, such beliefs may do the opposite and soothe fears of demise. ...read more.